YOU ARE AT: Business MK > News > New network aims to tackle gender inequality 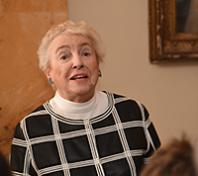 The county has seen the launch of the EVOLVE network by the Bedfordshire and Luton Community Foundation. Hosted by the High Sheriff, Julian Polhill at Howbury Hall, the launch was lifted by an inspiring speech from the well-known business woman and philanthropist, Dame Stephanie Shirley.

The EVOLVE network was initiated to harness the skills, expertise and resources of local women in order to address gender inequality within the county and to raise funds for the Mark West Fund for Women, which funds local charities who support women in vulnerable situations.

“Many women work in part-time, insecure employment which makes them vulnerable but conversely a lot of the services they need to access for themselves and their families, have also been severely underfunded.”

So far, the Foundation has raised almost £100,000 for the Mark West Fund for Women from individual donations and from organisations such as London Luton Airport and the Amateurs Trust.

The donations have been used to fund projects run by local charities such as Azalea to help women, facing poverty and homelessness and Families First who work with victims of domestic abuse.

The Foundation is calling on local women who are interested in being part of the movement to advocate for gender equality in the county and to raise funds for women, to come together in this collaborative network.

It also paid tribute to Bedford accountancy firm MHA MacIntyre Hudson and to Bedfordshire Chamber of Commerce for supporting the event. HM Lord Lieutenant of Bedfordshire Helen Nellis has become the network’s patron.