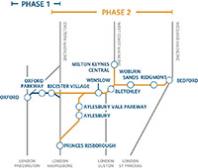 The NIC’s report says that the area could increase its contribution to the national economy from £90 billion a year to more than £260 billion.

He encouraged local government to work together to deliver new and improved infrastructure, helping to unlock opportunities to deliver one million new homes and jobs by 2050, including the country’s first new towns in 50 years.

The report has been welcomed by business and local authority leaders across the region.

Key transport projects need to be given new momentum by the government, the report says, including:

The deal proposed could help double the rate of housebuilding and deliver one million new homes and jobs by 2050 but Lord Adonis stressed that action needs to start immediately to get work under way.

He said: “The arc spanning Cambridge, Milton Keynes and Oxford attracts the brightest and best from some of the most cutting edge industries.

"But the area also suffers from a lack of available homes and an infrastructure network that is feeling the strain, pricing local people out of the market, making it difficult for businesses to recruit staff, and threatening the future competitiveness of one of the most successful parts of the country.

“A ground-breaking deal between ministers and local leaders could transform the area, helping to double the rate of housebuilding and deliver the first new towns this country has seen for half a century.

"With this one of the most economically important parts of the UK, it could add billions of pounds a year to the national economy.”

Ann Limb, chair of the South East Midlands Local Enterprise Partnership, said: “We welcome the commission’s report that recognises the Oxford-Milton Keynes-Cambridge growth area as one of the most economically important parts of the country.

“SEMLEP has identified priorities to grow businesses, grow people and grow places to ensure that our economy remains highly productive, resilient and continues to stimulate innovation to deliver growth.

"Maximising the opportunities that will result from stronger East-West links is integral to helping us to achieve our vision of the South East Midlands as the commercial core of the Growth Corridor.”

"We also strongly support the recommendation that to enable growth, local authorities require certainty on the timing and funding for infrastructure delivery.

“Milton Keynes now looks forward to working with government and our neighbours on how we can meet the challenges of delivering significant extra growth across the corridor. The commission’s report is a strong starting point for an open dialogue on how we can best achieve the requirement for growth while meeting the aspirations of local people.”

"We agree with the commission’s views that development should not be to the detriment of existing communities and to ensure this we need investment in critical infrastructure up front.”

Alex Burns, president of Millbrook, said the area is thriving as a high-technology cluster with particular focius on transportation. “Our business growth is currently constrained by our ability to relocate talented individuals to the area and this new deal has the potential to solve housing and transport infrastructure issues,” he added.

“This could add significantly to the capacity of the area for economic growth.”

The report stresses that measures can be taken while at the same time protecting and enhancing the natural environment of the area, and without making changes to existing Green Belt protections.

The report also includes recommendations that by 2020:

Lord Adonis said: “I urge local leaders to seize this opportunity and work together with Government, both for the benefit of their residents and of the country as a whole – all by delivering a million new homes and jobs by 2050, investing in improved road and rail links and protecting the area’s natural environment.”