YOU ARE AT: Business MK > News > New business figures ‘give us even more to shout about’

New business figures ‘give us even more to shout about’ 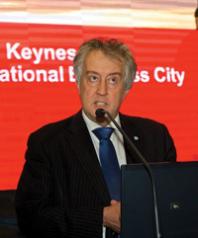 Unemployment has also fallen for the fourth month in a row, from 2.6% in October to 2.3% last month and remains significantly lower than it was a year ago (3.4%).

The latest Annual Business Register and Employment Survey shows that between 2009 and 2012, the number of people working full and part-time in Milton Keynes rose from 137,240 to 144,316 employees – a significant 5.2% increase in jobs.

The ‘jobs to home’ ratio stood at 1.38, which shows the council is well on its way to reaching its key target of 1.5.

The number of business units in Milton Keynes increased from 11,150 units in 2012 to 11,530 in 2013, with an increase of 3.4%.  This indicates both the strongest business presence in the South East Midlands Local Enterprise Partnership and in the South East England region as a whole.

Cllr David Hopkins (pictured), cabinet member responsible for economic growth, said: “We have so much to shout about in Milton Keynes, with unemployment falling, more new jobs being created and many new opportunities for our borough.

“We have previously been praised as the best place to do business in the UK, and these new figures back that up.”