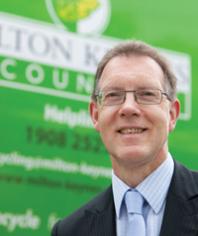 Chief executive David Hill represented the council – and the borough – at the event, held at the Church House Conference Centre in Westminster.
The range of speakers at the seminar, entitled Meeting the Growth Agenda Challenge, included Lord Heseltine and Treasury Minister Greg Clark, as well as representatives from other councils.
Mr Hill (pictured) was chosen to speak after an independent study of councils across the country named Milton Keynes as the best place to do business.
Working with the MJ, researchers from independent researchers Local Futures looked at scores of different criteria to come up with 15 measures in three categories: economic performance, human resources, and environment and infrastructure.
Milton Keynes had the best composite score of all 325 local authority areas in England in the analysis, designed to build a picture of the attractiveness of towns and cities to investors.
Mr Hill said: “It was very gratifying to be given a national stage to extol the virtues of Milton Keynes, and talk about our position as an economic powerhouse.
“People and businesses in Milton Keynes have always known that it’s a great place to work and live, but it’s good to be able to point to an independent, objective statistical analysis that says the same thing."
In a special Inward Investment supplement, published in February, under the headline A Winning Formula for Milton Keynes’ the MJ stated: “The city scored highly on a range of economic, human resources and environment and infrastructure indicators – including being placed third for productivity, seventh for knowledge workers and eighth for industrial
structure.”
Milton Keynes was singled out for having a large and growing skilled local workforce, for the number of people working in high tech ‘knowledge businesses’, and for having plenty of available commercial floorspace, as well as for its high productivity, and for the number of new businesses being established.
There are now more than 11,000 firms based in Milton Keynes, including major companies such as Santander, Network Rail and Home Retail Group, and the borough has one of the highest business start-up rates in the UK. 2,275 new companies were established in 2012 and five companies move to – or expand in – Milton Keynes every month.
Other authorities represented at the event included Warrington, which also scored highly in the Local Futures report.