YOU ARE AT: Business MK > News > MPs will debate funding into brain tumour research as e-petition passes signature milestone 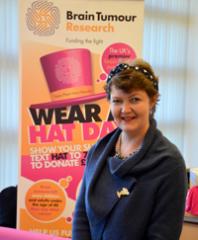 More than 118,000 people had signed the petition – a milestone achievement in the campaign for more research funding for the disease.

Once an e-petition attracts 100,000 signatures it will be considered for debate in the House of Commons.

The e-petition was based on a Manifesto for Change published by Shenley Wood-based national charity Brain Tumour Research. It was launched in August last year and quickly gained momentum, prompting the first ever inquiry by the House of Commons Petitions Committee.

The committee is now preparing a report presenting evidence heard during the inquiry from scientists, clinicians, charities, patients and their families who were invited to submit their experiences. 1,106 people did so before the end of October.  Once the report is released, the committee will schedule a debate in parliament.

Helen Legh (pictured), a broadcaster on BBC Three Counties Radio, who lives in Bletchley and has an aggressive brain tumour, said:  “I am delighted that the petition has passed 100,000 signatures and continues to climb. It is great that the petition will raise awareness and help other families in future.

“Now I look forward to our voices being heard in the corridors of power. One day we will find a cure for this cruel disease.”

Brain Tumour Research is the current Charity of the Year of Milton Keynes Chamber of Commerce. The charity’s head of external affairs Hugh Adams said: “The e-petition is a great example of democracy in action. Our fundraisers and supporters across the UK have worked tirelessly and the tremendous response is an indication of just how many families are touched by brain tumours.

“Brain tumours kill more children and adults under the age of 40 than any other cancer … yet just 1% of the national spend on cancer research has been allocated to this devastating disease.

“We are striving to fund a network of seven dedicated research centres, while challenging the government and larger cancer charities to invest more in brain tumour research. Help us fund the fight. Together we will find a cure.”

Brain Tumour Research helps to fund an annual £1 million programme of research at its Centre of Excellence at the University of Portsmouth.

Further partnerships announced last year with Plymouth University, Queen Mary University of London, and Imperial College pave the way for a £20 million investment in brain tumour research over the next five years.