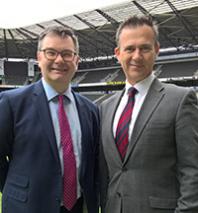 The Department for Transport yesterday (Wednesday) announced its choice of the East West Expressway corridor,  which is expected to take up to 40 minutes off the journey between the A34 south of Oxford and the M1.
In a statement, Milton Keynes MPs Mark Lancaster and Iain Stewart said: "This represents a major investment into the economy of Milton Keynes and surrounding areas. It will transform travel time from the M1 to the M40 and release huge economic growth opportunities.”
The Department for Transport put forward three route options for the expressway. Input from Highways England led to the choice of ‘Option B’, taking the route from Abingdon though Winslow to south Milton Keynes.
A Department of Transport spokesman said the preferred route would provide better links to jobs, education, health and leisure opportunities.
The proposal will be the subject of full public consultation next year.
The MPs said: “The corridor is just the first phase of the project. A much more detailed piece of work will now be started looking at the exact route the road will take.”
“With the East West Rail project also well under way, it is clear the government sees real potential in our region and is willing to invest huge amounts into our infrastructure.”
Mr Stewart and Mr Lancaster plan to meet with highways England to discuss the proposed route in more detail. They said: “We will be making it very clear we want the maximum benefit for Milton Keynes and to discuss how best we limit effects on the environment."
LEP chair: An opportunity to connect economic assets
Buckinghamshire Thames Valley Local Enterprise Partnership chair Andrew Smith said: “We welcome today’s announcement, which gives greater assurance and clarity on infrastructure delivery for the area as well as the opportunity to connect economic assets from across the corridor.
"In addition, the announcement gives reassurance to businesses looking to invest and grow in Buckinghamshire as part of this economically led growth corridor..
“Of course, any project of this scale needs to be carefully planned, which is why we would welcome close working with government in the selection and delivery of the final route.”