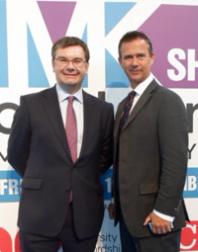 The funding is part of a government effort to improve links between Oxford, Milton Keynes and Cambridge, a region that is being dubbed the ‘brain belt.’

The National Infrastructure Commission was tasked by Government after lobbying by Mr Stewart, MP for Milton Keynes South, and others to look into ways of better connecting Milton Keynes with Oxford and Cambridge.

The Commission, which published its interim report earlier this month, said the Oxford-Milton Keynes- Cambridge corridor has huge potential to be the UK’s Silicon Valley but only with the right housing and transport links.

In his Autumn Statement yesterday (Wednesday), Chancellor of the Exchequer Philip Hammond committed to deliver the Oxford-Cambridge Expressway. He told the House of Commons: “This project can be more than just a transport link, it can become a transformation-tech corridor.”

Milton Keynes North MP Mark Lancaster said: “This demonstrates the government is serious about investing in the infrastructure necessary for Milton Keynes’ expansion and future growth.

“Iain and I will be working closely with the government to make sure the project is carried through and delivered.”

Nationally, the funding forms part of the government’s pledge to double GDP expenditure on economic infrastructure.

Mr Stewart has lobbied the NIC and government hard to explore the economic benefits across the region. He  said: "This is very positive news for Milton Keynes. The project will not only promote economic growth, but also drive regional regeneration and support job creation.

“If we get this right we could well create the UK’s Silicon Valley, an area recognised internationally for science, technology and innovation.”

"Milton Keynes sits at the heart of the Oxford and Cambridge corridor so it is great news about the government’s commitment to deliver on infrastructure for the Oxford to Cambridge link.

“The National Productivity Fund announced should also help to unblock land for housing along this route.

"These announcements have the potential to positively impact Milton Keynes economy and future growth plans – we  await the further detail with interest.”