YOU ARE AT: Business MK > News > MPs welcome fall in youth unemployment 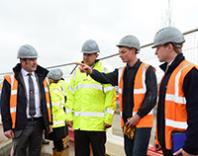 The figures show that in September this year 385 young people in Milton Keynes were unemployed compared to 765 in March 2013. The numbers have continued to fall every year since 2013 and over the last 12 months the number has fallen by a further 55 people.

Average earnings increased by 2.7% in the year to August, up from 2.6% the previous month. Including bonuses, earnings grew by 3.1%.

Milton Keynes South MP Iain Stewart said: “I am really encouraged to see young people continuing to find work and start a career. It is important to note that the vast majority are in full-time permanent jobs, and, as we know, with wages that are on the up, outpacing inflation for the seventh month in a row.”

Milton Keynes North MP Mark Lancaster added: “Unemployment is at its lowest level since the 1970s. Since 2010 over 300 young people in Milton Keynes have been able to get on the career ladder, achieve the security of a job and with a regular salary. That is thanks to action this government has taken to build an economy that works for everyone here in Milton Keynes and across the UK.”