YOU ARE AT: Business MK > News > MPs welcome £25m grant to boost services and infrastructure 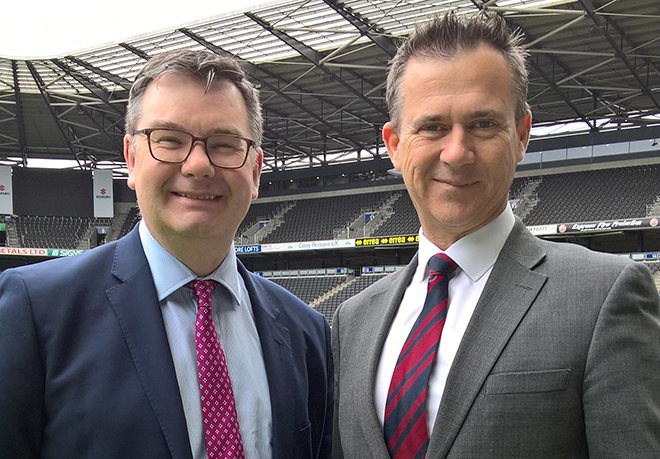 MPs Mark Lancaster and Iain Stewart have secured a £25 million windfall of cash from the government which will be invested in local services and infrastructure across Milton Keynes.

It is part of a government announcement of a £3.6 billion Towns Fund which will support towns to build prosperous futures and equal out areas of deprivation. Towns across England will work with the government to develop innovative regeneration plans, better local infrastructure and an improved arts and cultural offer.

Business and community leaders will now be invited to join forces to draw up plans to transform their town’s economic growth prospects with a focus on improved transport, broadband connectivity, skills and culture.

Milton Keynes South MP Iain Stewart said: “I am excited to see how we can use this funding to make a real difference to our local economy. I really want to see it used in innovative ways to regenerate our struggling high streets such as Bletchley that have been abandoned by the council.

“We have made tough decisions as a government over the past nine years but because we have fixed the roof, we can now invest and address the real things that matter to local people.”

His Parliamentary colleague Mark Lancaster, MP for Milton Keynes North, added: “I am delighted that we have secured this funding for Milton Keynes. It has been a big battle trying to stop the Labour council concreting over our rural communities but we seem to have got there and in the process secured a much better deal that will be focused on economic development and job creation.”

Milton Keynes Council’s Conservative group leader Cllr Alex Walker has welcomed the deal.  It comes with no strings attached, he said, which is in stark contrast to the controversial deal proposed by the Labour-led council which bid for £30 million but in return wanted to double the population of Milton Keynes, a move widely rejected.

“This just goes to show the value of having two experienced and strong voices in Westminster,” he added. “Mark and Iain put their foot down and have now delivered a windfall without any promise of reckless accelerated housing growth.”