YOU ARE AT: Business MK > News > MPs welcome 25% annual fall in unemployment numbers 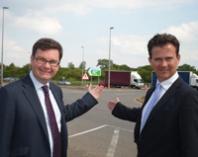 Nationally, the ONS also announced that for the first time since 2009 wages are now increasing faster than inflation, easing the pressure on families.

Mr Lancaster, MP for Milton Keynes North, said: “These positive figures are great news for Milton Keynes and show that the Conservatives’ long-term economic plan is working. We’re helping people get off benefits and into work, giving them the security and peace of mind of a regular pay packet, but there is still much to do.”

Across Milton Keynes the number of claimants has fallen by 1,119 over the past year.

Mr Stewart, who represents Milton Keynes South, added: “I was delighted to see the ONS figures. We are doing the right things; creating a secure future for hardworking taxpayers.

“However, there is still a long way to go and we must not risk our hard-fought gains.”

The ONS also announced that employment figures are at a record high with 30.8 million people in work – the highest level on record.