YOU ARE AT: Business MK > News > MPs assess the impact of government’s Autumn Statement 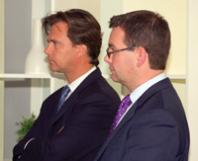 Milton Keynes North MP Mark Lancaster said: “The Autumn Statement today was good news for young people in Milton Keynes. Employees under the age of 21 will now no longer attract National Insurance which will be a major incentive for business to get young people into employment – great news for a city like Milton Keynes.
“With more apprenticeships being offered, it is great to see this popular scheme going from strength to strength. Milton Keynes is a young city with many schools producing pupils who are ideal candidates for apprenticeships, we can get the young people of Milton Keynes working and our businesses thriving.”
Commuters also received real help with the cost of travelling, including a freeze on fuel duty and a lower cap on rail fare increases in line with inflation, rather than at 1% above RPI.
Iain Stewart, who represents Milton Keynes South, said: : “There were many things I was pleased to hear today but I particularly welcome the government’s action to curb rail fare increases.
“Fares have risen at a substantial rate over the last decade and limiting the potential increase in train fares will be welcome news to commuters in Milton Keynes. It is fairer and will help people and their finances.”
Other highlights picked out by the MPs included support for young people looking to get ahead in working life. The government has had great success with its apprenticeship scheme and will therefore be increasing funding for the scheme, allowing an additional 20,000 apprenticeships to be funded over the next two years.
They also welcomed the funding being provided for free schools meals for pupils in reception, year 1 and year 2 from September 2014.
The government promised to make good on this by not only providing the funding for the meals but also the capital for the increased demand in school kitchens.
Starting in April 2015, married couples and civil partners will receive a tax break which is set to value at approximately £700 million. Married couples and civil partners will also be able to transfer their personal tax free allowance of up to £1,000.