YOU ARE AT: Business MK > News > MP welcomes increase to fast train services 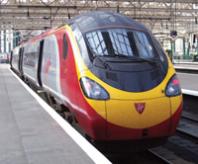 A total five extra high-speed trains a day will include the station on their route. The new timetable comes into effect on Sunday (December 8).
Milton Keynes South MP Iain Stewart, a member of the Transport Select Committee in Parliament, has campaigned for additional services since his election in 2010.
He said: “Anyone commuting to London knows how full peak time trains can be. While I would still like to see more Virgin services available for MK commuters in the morning and evening peaks, this is a welcome step in the right direction.”
The improvements announced by Virgin Trains also include new services linking Milton Keynes Central with the North West, the Lake District and Scotland.
London Midland, which operates the local commuter services through Milton Keynes and Leighton Buzzard to London and Birmingham, has also commissioned additional coaches to ease overcrowding.
Longer term, said Mr Stewart, the East-West Rail Project linking Bedford and Oxford via Bletchley opens up the possibility of new Milton Keynes to London services via Aylesbury.
Mr Stewart said: “I will continue to campaign hard.”
The additional trains that will now pick up and set down at Milton Keynes Central:
Northbound
16:50 MKC to Manchester Piccadilly
17:13 MKC to Edinburgh
Southbound
08:46 MKC to London Euston
23:05 MKC to London Euston
00:23 MKC to London Euston