YOU ARE AT: Business MK > Commercial Property > MP tops out new HQ 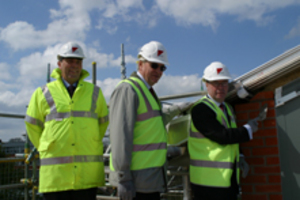 Marriott is building the £4.38m headquarters for another Kier company, Twigden Homes, in the grounds of Tempsford Hall, Kier Group’s estate near Sandy.

Mr Burt laid the very last brick in the building, before Kier Regional managing director Dick Side presented him with a ceremonial trowel to mark the occasion.

Alastair Burt commented: “I am delighted to be here at the topping out of a project which has involved so much hard work by such a dedicated team. It’s great to have a company like Kier, with its national and international reputation, in my constituency. Kier Group puts a lot of care and consideration into attracting people into the construction industry, investing greatly in schemes such as the [Centres of Excellence in Learning] and apprenticeship programmes. I am proud to be part of this ceremony today.”

The Twigden Homes headquarters will be officially named Lysander House, after the Lysander Squadron which flew from Tempsford Airfield during World War Two – the squadron carried out covert and dangerous supply and agent delivery operations.

The name was chosen after Kier launched a competition among employees, and Mr Burt presented the joint winners, Graham Pryor and Cliff Owen, with a bottle of champagne each.