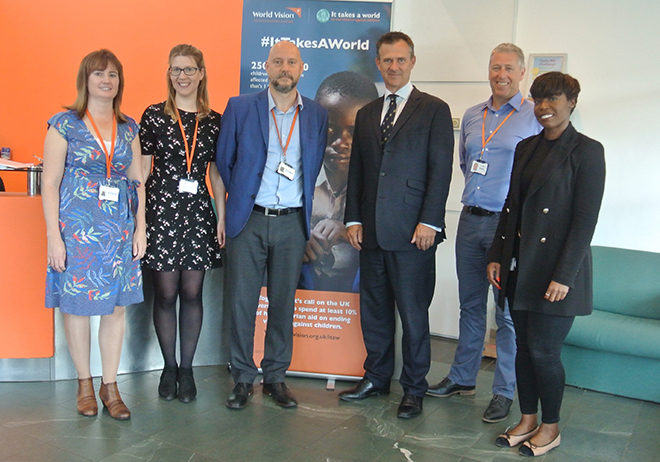 MP Mark Lancaster has praised the work of Milton Keynes-based charity World Vision on a visit to its headquarters in the city.

The Christian organisation is working in almost 100 countries to help the world’s most vulnerable children and their communities. The UK branch was set up in 1982 in response to the Ethiopian famine and moved to Milton Keynes in 1997.

Mr Lancaster, MP for Milton Keynes North, met with the charity’s directors to hear about its work overseas.

After the meeting, he said: “It was great to be able to return to World Vision, an organisation based in the heart of my constituency, an agency that brings intervention, impact and hope to change children’s lives across the globe.”

Recent hightlights for World Vision UK include its advocacy campaign It Takes A World… To End Violence Against Children in Emergencies, which aims to see greater protection of children in emergency situations, and has the support of over 34,000 people across the UK.

World Vision UK’s acting chief executive Graeme Newton said: “UK aid continues to play a vital role in efforts to save lives in some of the world’s harshest places.

“The UK public’s generosity has enabled World Vision and other aid agencies to bring relief to people in countries marred by wars and natural disasters. UK aid has also helped lift millions of people out of poverty and provide access to health services and education.

“We were delighted to host Mark Lancaster MP at our office in Milton Keynes. It is great to see Members of Parliament taking an interest in the work that we do.”