YOU ARE AT: Business MK > News > MP praises work of government communication centre 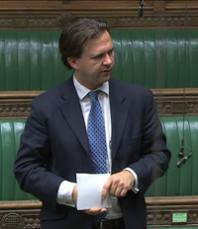 Mark Lancaster (pictured) was speaking in the House of Commons about Hanslope Park, home to Her Majesty’s Government Communication Centre.
Foreign Office Minister Henry Bellingham paid tribute to the staff of Hanslope Park and their highly professional work, which netted £4 million profit last year.
The Parliamentary Under Secretary of State added: “It now gets a quarter of its income from other government departments and is also bidding for contracts overseas so it is one of the jewels in the FCO crown.”
Hanslope Park researches, designs, develops and produces communications systems, equipment and related hardware and software.
It was vital during the Second World War and Bletchley Park-based mathematician and codebreaker Alan Turing worked there during the latter part of the war.
After the debate, Mr Lancaster – MP for Milton Keynes North – said: “The work going on at Hanslope Park is highly specialised and essential to the protection of Britain. I am determined to ensure that it continues to be recognised for this vital contribution to our country. It is a place which we should be very proud of locally.”