YOU ARE AT: Business MK > News > MP champions apprenticeships in Commons debate 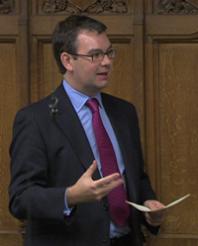 Speaking in a debate in Parliament about apprenticeships, Iain Stewart (pictured) argued that there should not be any form of snobbery against apprenticeships and that they should be regarded as an equally valid option for training and education after school.
He told the Commons that careers advice services sometimes focus too much on the academic route and not enough on the vocational route with apprenticeships or other training options.
The Milton Keynes South MP used the debate to celebrate the higher than average take-up of apprenticeships in Milton Keynes. The city has seen an increase of more than 70% in the number of apprentices taken on this year.
After the debate, Mr Stewart said: “I believe that, for the long-term health and rebalancing of UK economy, we need to value apprenticeships and the learning that goes with them.”
“I am pleased that the government will offer employers an incentive payment of up to £1,500 to encourage them to take on an apprentice. I also welcome measures to simplify the bureaucracy and make it quicker and easier for employers to take on an apprentice.”.
From September, the Education Act 2011 will place a new duty on schools to secure access to independent and impartial careers guidance for pupils in school years 9 to 11. Subject to consultation, this will be extended down to year 8 and to young people aged 16 to 18 in schools and further education settings.