YOU ARE AT: Business MK > News > MP appeals to ‘Queen of Shops’ to boost town’s high street 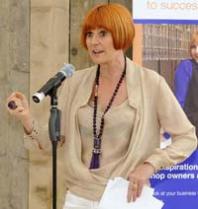 Mark Lancaster, who represents the Milton Keynes North constituency, has written to straight-talking Mary Portas (pictured), who turns around the fortunes of businesses in TV shows such as Mary Queen of Shops, asking her to lend Newport Pagnell High Street a helping hand.
In his letter, Mr Lancaster described the drop in footfall in the town, despite the diversity and vitality of the shops and services.
He also showed how the town is using its heritage to its advantage, for example with plans for a disused petrol station to become a retro Shell diner.
The history of Aston Martin Lagonda and the 200-year-old Iron Bridge are also assets on which the town can capitalise, he suggested.
He also commended efforts to make the high street work for 21st-century lifestyles: for example, the Food Box scheme which takes greengrocers’ produce to residents’ doorsteps.
Mr Lancaster said: “Newport Pagnell High Street has so much to offer but I think Mary will have some great ideas about how we can ensure this high street can thrive even further.”
Ms Portas has been asked by the government’s Department for Business, Innovation and Skills to conduct an independent review of revitalising the country’s high streets and has pledged to visit some during her study.