YOU ARE AT: Business MK > News > Monarch staff back 30% wage cut 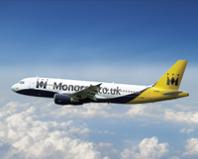 The change is part of Luton-based Monarch’s plan to evolve into a leading scheduled European low-cost airline.

Staff were balloted on the proposed changes after talks with pilots union BAPLA and UNITE, which represents engineers and cabin crew.

Results showed pilots voted 96% in favour, over 90% of cabin crew voting yes and more than 88% of engineers at Monarch Aircraft Engineering Ltd also backed the proposal.

The announcement comes a day after the Monarch Holdings board confirmed Greybull Capital LLP as the preferred bidder to acquire Monarch from the group’s current shareholders, principally the Mantegazza family.

Monarch Group chief executive officer Andrew Swaffield  said: “This vote represents another step forward in our efforts to transform Monarch and demonstrates a commitment from every member of the Monarch workforce.

“Yesterday we made a major announcement that Greybull Capital is the preferred bidder for Monarch. Today’s news that staff accept changes to their terms and conditions, including considerable reductions in salaries, is a further, significant step in our efforts to complete our proposed transaction.

“Further hurdles are still to be overcome, however we have also secured major agreements with aircraft lessors and commitments on future investment from Greybull. This is firm progress for Monarch, its employees and for its customers.”

BALPA general secretary Jim McAuslan said: “Pilots and their colleagues at Monarch have stood up and made major sacrifices to secure the future of this important British company, accepting lower pay and reduced terms and conditions within a restructured airline.

“We welcome the announcement that Greybull are to moving towards securing their position as majority shareholders in Monarch.”

Oliver Richardson, national officer at UNITE, added: “Our priority is the welfare and longer-term job security of our members. Although the discussions over the past few weeks have been difficult and our members are sacrificing a lot, what is clear is that they remain committed to the future of Monarch and have voted accordingly.

“We will be seeking assurances and commitments from the new investors and company regarding future business plans and any impact they might have on our members.”

Unite has more than 1,000 members working for Monarch in engineering and cabin crew roles.

Greybull is a family office with a focus on investing in private companies across a diversified range of industry sectors.

It views an investment in Monarch as a long-term opportunity in a very strong brand with great potential in all of its markets, and intends to be supportive shareholders throughout Monarch’s next chapter.

Completion of a deal remains subject to the successful outcome of ongoing negotiations, whereupon Greybull intends to provide significant capital to Monarch in order to grow the Group and to capitalise on the long established and trusted brand name.

Conditional upon the successful conclusion of these negotiations with Monarch stakeholders, a transaction is expected to complete towards the end of October.