YOU ARE AT: Business MK > News > Modernisation plans for National Bowl are unveiled by owners

Modernisation plans for National Bowl are unveiled by owners 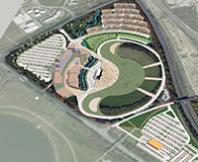 MKDP, the Milton Keynes Council-owned body charged with developing the land assets acquired from the Homes & Communities Agency in 2013, is planning to create a year-round facility housing music-based leisure, retail and hospitality venues.

It believes that upgraded facilities at the National Bowl will give Milton Keynes a unique attraction able to draw major performance artists and visitors from around the world.

The aim is to incorporate a range of uses that could help unlock MK’s musical heritage and recapture the spirit of invention required to leverage the city’s cultural assets defined by the MK Futures 2050 report.

Proposals under consideration include the creation of a permanent ‘music street’ as a backdrop to the arena, with venues offering year-round performance space for all genres of music, speciality music retail, a hotel, themed restaurants and bars.

MKDP chief executive Charles Macdonald said: “Since the National Bowl opened in 1979, what both concert organisers and attendees expect from venues has changed significantly. While the National Bowl has an extremely strong music heritage, it is vital that the right decisions are made to regenerate it appropriately and put it back on the musical map where it belongs.”

MKDP, which owns the National Bowl site, is working with a project team of architects, leisure specialists and engineers to investigate further how to deliver the investment and facilities required to make the site financially and practically viable.

This is taking into account feedback from its initial round of stakeholder engagement that has seen the team talking to a wide range of people across the city.

Mr Macdonald said: “Feedback to our ideas has been very positive and we look forward to being able to share more detailed plans later in the year.”