YOU ARE AT: Business MK > News > MKBAA: Winning has opened so many doors for us, says Business of the Year 2018

MKBAA: Winning has opened so many doors for us, says Business of the Year 2018 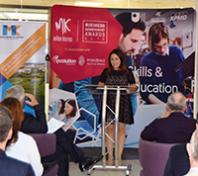 Now, six months after the Denbigh-based company did the double at MKBAA 2018, picking up awards for both Innovation & Technology and the coveted Business of the Year Award, chief operating officerCheryl Brimson tells us that’s all changed.

“In many ways, we were Milton Keynes’ best kept secret before we won our awards in March” explains Cheryl. “There were a lot of shocked people in the room when we won, and none more so than us, as there were so many ‘better-known’ Milton Keynes businesses in the running for it…

“To be told that the judges’ decision was unanimous really was the cherry on top of the cake for us.

“We’re a tight knit team here and the sense of pride in the office after our win was huge, everyone really felt part of the collective effort that led to our awards.”

Having almost doubled its number of staff in the past year, due to customer demand, and having recently become a strategic partner with Porsche, it’s fair to say that ATL is a rapidly growing business, both in size and stature.

We asked Cheryl how things have changed for ATL since their MKBAA win.

“It’s helped us massively in terms of recruitment. I joined the company just over a year ago and I had no idea that it existed but now that word is starting to get out, we’re getting a lot more interest and the right applicants applying for our vacancies.

“It’s opened the door to apprenticeship opportunities too, something that we‘ve really struggled to get local colleges to engage with us about in the past, but we’re now in talks with Milton Keynes College and hoping to have a couple of apprentices on board by the end of the year.

“The support we’ve had from other MK businesses since our win has been immense, our network grew significantly overnight and we were suddenly seen as a real player on the Milton Keynes business scene.

“I definitely didn’t realised how much gravitas the award would have, it is incredibly prestigious,” explains Cheryl. “I don’t know how we’re going to follow it up next year!”

ATL is keen to engage with the wider Milton Keynes community too. It has competed in the Milton Keynes Dragon Boat Festival in 2017 and 2018 and supporting local charities, including Willen Hospice.

“Our hope is that in three years’ time, we’ll be recognised locally as a Niftylift type business,” says Cheryl. “We know that we need to do our bit in terms of apprenticeships and community engagement but we’re in a much stronger position to do that now, thanks to MKBAA opening the door for us.

“It’s a really exciting time. We’ve been quietly making a massive impact on the F1 industry and now we’re in pole position to move our business forward locally and within other target markets.”

Follow in Aero Tec’s footsteps and enter the MKBAA. For more details on how, and to bok a table at the awards ceremony in March, visit www.mkbaa.co.uk. To find out more follow @MK_BAA on Twitter, Facebook and join the discussion on LinkedIn.