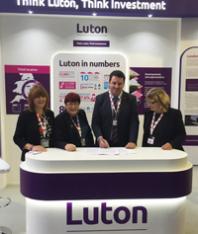 The signing, with Luton Council and regional growth agency the South East Midlands Local Enterprise Partnership, took place at MIPIM London, the largest property management conference in the UK, at which the London Luton Airport Enterprise Zone took a stand and reported considerable interest from businesses looking to expand or move to Luton.

The enterprise zone was announced in the Autumn Statement. Last year by former Chancellor of the Exchequer George Osborne.

Mr Percy, Minister of State for Local Growth and the Northern Powerhouse, said: “Enterprise Zones offer the support new businesses need to grow and thrive and I am delighted to set out the next steps for the Luton Airport Enterprise Zone. This government’s new £1.2million fund will help speed up development on the site and boost future growth in the region.”

“It is great to have been able to sign this agreement and move our partnership forward.”