YOU ARE AT: Business MK > News > Minister praises university’s contribution to economic recovery 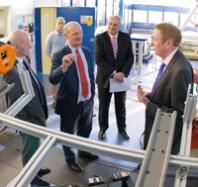 Speaking after a visit to the university, Universities and Science Minister David Willetts MP said that research carried out at Cranfield was boosting the aerospace and automotive sectors in particular.
In a speech on the government’s aspiration to make the UK “the best place in the world to do science”, Mr Willetts used Cranfield University as an example of how universities should be working closely with business.
He was shown round the university campus by vice-chancellor Professor Sir John O’Reilly and deputy vice-chancellor Professor Clifford Friend.
The minister toured the university’s industrial-scale facilities including the Airbus-supported Advanced Robotic Wing Manufacture facility and the Cranfield Oil and Gas Centre – whose innovations are supporting development of the next generation of deep sea oil exploitation.
He also visited the university’s Off Road Dynamics Facility. the only centre of its type in the UK to study the relationship between machines and the soil environment.
Mr Willetts saw its work on a range of vehicles ranging from household names such as Jaguar Land Rover to the next generation Mars Rover.
He completed his visit at Cranfield Aerospace Ltd, which is working on aircraft including a government Aeronautical Research Aircraft  based at Cranfield Airport and the X48B, a revolutionary aircraft supplied to Boeing and NASA.
Mr Willetts said: “Cranfield University is undertaking an array of sophisticated research. Its work with the aerospace and automotive industries in particular will play an important role in driving growth and boosting UK manufacturing.”
Professor O’Reilly said: ‘The Minister’s visit to Cranfield has allowed him to see how a postgraduate university linked closely to business can make a major contribution to economic growth and rebalancing of the UK economy.
"He has seen how Cranfield is contributing to the research and innovation of our strategic partners, helping secure high-skill jobs for the UK.”