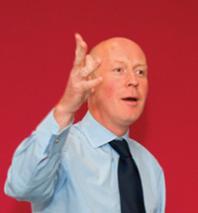 Jonathan Shaw, regional minister for the South East, told senior business and public sector figures that the city had a “vital” role to play in the economy.
He praised the way in which Milton Keynes business and other sectors of the community worked in partnership to drive the city forward. “I have seen the public and private sector working together to ensure the city can secure the skills it needs for the future,” Mr Shaw said.
The minister (pictured) was speaking to around 50 senior city figures at University Centre Milton Keynes at the end of a tour of the city. Mr Shaw visited Red Bull Racing and Network Rail to see how the area was responding to the economic challenges and to hear about investment in the local economy.
He then visited new residential developments at Broughton Gate and Vizion in Central Milton Keynes.
“For the development of Milton Keynes, it is essential for every part of the community to feel a sense of benefit from it by using all of its energy to maximise the resources,” Mr Shaw said. “I get that in spades when I come to Milton Keynes.”
Network Rail’s decision to base its new national headquarters in the city was a major achievement, he added. The on-track success of Red Bull Racing in this year’s Formula 1 championships added to Milton Keynes’ profile internationally.
Mr Shaw urged the city to continue its partnership approach as it battled to ride out the recession and lay the foundations for the future. He said: “I have seen companies which challenge themselves and look to the future. I have seen whole communities taking shape.
"I have seen innovative technology and I have seen the public and private sector working together to ensure the city can secure the skills it needs for the future.
"“Milton Keynes is an innovative, vibrant and positive city and it is vital to the South East economy.”
David Hill, chief executive of Milton Keynes Council, described the city as “a powerhouse of the British economy”. He added: “Strong partnership works to build on our track record of success, overcome the challenges and emerge from recession with a strong, cohesive and united community.
“It is good to know we have a listening ear in Whitehall, someone who can speak for Milton Keynes.”