YOU ARE AT: Business MK > News > Mayor is feeling the love for Milton Keynes

Mayor is feeling the love for Milton Keynes 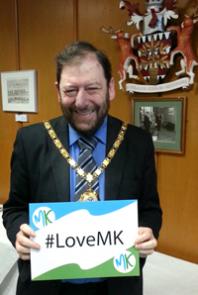 It’s the brainchild of official tourism organisation Destination Milton Keynes, which is asking businesses, visitors and residents to spread the love via Twitter.

And the Mayor is one of a host of leading city figures supporting the campaign, including MK Dons FC chairman Pete Winkelman and Iain Lee, presenter of BBC Three Counties Radio’s weekday breakfast show.

DMK is calling on the MK Twitter community to use the hashtag #LoveMK on all their tweets today (Thursday) to try and get it trending in the UK, as it did three times on the same day last year.

Although just a small gesture, DMK is hoping that by promoting the city via the social media channel they can raise the profile of Milton Keynes and its status as a visitor destination.

DMK marketing manager Carys Underwood says: “We’re hoping that this year the Twitter community will get behind us again and get #LoveMK trending, not only to promote Milton Keynes as a destination but to show how much pride they have in the place that they live and work in.”

To get involved and to show your support just use #LoveMK on any tweets you send today and help spread the love.

You can also follow @DestinationMK for your chance to win prizes on the day as they run ’12 competitions in 12 hours’ where you could win by just using the hashtag.

You can also download the #LoveMK Day poster and get your photo taken to show your support, tweet it to Destination MK and they’ll RT and add it to their Facebook gallery.

The day also coincides with the launch of the new LoveMK Guide which has been produced by MK Web and Destination Milton Keynes and showcases all the activities on offer in the area.

DMK works not only to promote Milton Keynes as a leisure and business destination but also to harness the pride that many people have in their city. The visitor economy is worth over £200 million to the area and by encouraging the community to get involved in promoting their city, it could increase the wider benefits even further.