YOU ARE AT: Business MK > News > Mayor calls on firms to develop export business 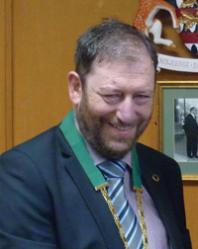 Hundreds of firms in the city have international customers but more could benefit from strong demand for products and services made in the UK, he said.

And one of the leading exporters based in Milton Keynes has outlined how it is targeting expansion in Africa and Latin America.
The Tensator Group, which manufactures queue management solutions, has seen its turnover soar from £6 million to $60 million since it expanded overseas.
Cllr White pictured was speaking at a forum on international trade hosted by business advisers Mazars at its Central Milton Keynes office.
He said: “Practically every study I have come across indicates that Milton Keynes will lead this country out of economic recession. It is a city of many companies with an international customer base but there are plenty more that do not export that should.
“With 122 languages spoken in Milton Keynes, there is a rich supply of people to help you enter new overseas markets.”
He was joined on the panel by Tensator’s chief financial officer Adrian Day, Mazars head of international tax David Sayers, HSBC’s international business manager Jennifer Parkes and Jonathan Hacking, manager at the bank’s global markets division.
The countries considered ideal as export markets for UK firms is changing all the time. China, once a leading source of products and services, is rapidly becoming an attractive target market with a middle-class consumer population forecast to grow to 400 million within the next seven years.
Mrs Parkes said: “If you can get in, you will do well, but it needs a lot of investigation because buying behaviours are so different. British design is extremely popular so our fashion companies are doing well and iconic brands such as AGA ovens have entered China.
“I know of a cosmetics company that recently broke into the Chinese market by developing green tea flavoured toothpaste.
“However, you need to consult experts in Chinese markets to understand your costs and market potential."
Mr Day said that cost and quality standards were the reasons why Tensator decided not to set up in China nor in India, where success depends on connections.
The firm was focusing on Africa and Latin America, although it decided against Brazil. “Other Latin American countries are easier to expand into,” he added.
“Mozambique looks good, although business people there are not accustomed to contracts. There are similar issues with Angola and Algeria, along with moving funds between countries.”
Export potential is there for companies of all sizes. Mr Sayers said: “Sometimes small businesses are better at exporting than larger organisations. There is a very strong demand for British products. If you go looking for the markets, you’ll find them.”