YOU ARE AT: Business MK > News > Manufacturing is a key factor in UK’s recovery, says business minister 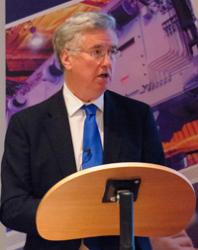 The sector is responsible for more than half the UK’s exports and is hugely valuable to the economy, he said.
The government has further demonstrated its support for the sector by implementing a series of support initiatives such as the Manufacturing Advisory Service to aid growth.
Speaking at the National Manufactiring Debate held at Cranfield University, Mr Fallon (pictured) said despite the UK was facing growing competition from developing nations such as Brazil, India, Russia and South Africa: “British companies both large and small are building enviable global reputations.”
The debate, the fourth to be hosted by Cranfield University, discussed whether a national manufacturing strategy is needed and if it could achieve a 20% GDP by 2020.
Cranfield’s head of the manufacturing and materials department Professor Rajkumar Roy said it was possible but “only with input from British people.”
Manufacturing output stands at more than 10% of UK GDP. Lord Alec Broers, a leading electrical engineer and a former chairman of the House of Lords Science and Technology Committee, told delegates that, in order to get anywhere near the 20% goal, “the UK needs to find the means to grow small and medium companies and to sustain large organisations.”
Ford of Europe’s chairman and chief executive Stephen Odell said that current Foreign Trade Agreements had to be implemented properly in order to work effectively. EU regulations “make an average car approximately twice as expensive as it otherwise would be.,” he said.
Dehumidifier manufacturer Ebac  is bringing the manufacture of its washing machines back to the UK. Its founder and chairman John Elliot said that the inefficiencies in FTAs had been caused by the global imbalance.
He said: “The UK has got to be able to trade evenly. It is up to government to address this at an international level.”
If two countries cannot trade evenly, the currencies should be adjusted, he added.
Dick Elsy, CEO of organisation High Value Manufacturing Catapult, said he thought a strategic national approach was the right decision for the manufacturing industry. The Catapult, developed by the Technology Strategy Board, helps small companies to scale up their innovations by demonstrating their practicality for commercialisation and investment.
“It is about giving manufacturers a reason to stay in the UK,” he said.
BBC reporter Maggie Philbin chaired a lively afternoon discussion forum. It concluded that manufacturing has the potential to improve the economy of the UK, young people being the key to the future of the sector, as are their teachers and mentors.
A number of the panellists also noted that it is important to find ways to bridge ‘the valley of death’ – turning innovative conceptual ideas into reality. Collaborative efforts of large organisations in partnering or mentoring SMEs could be the key to success.
Summing up, Ms Philbin said that if a national strategy is not required, then a form of manufacturing ‘ecosytem’ certainly is, incorporating all elements of the manufacturing industry, from academia, to SMEs, government and large international corporations, working together.