YOU ARE AT: Business MK > Lifestyle > Magnificent 7 Series deserves all its plaudits

Magnificent 7 Series deserves all its plaudits 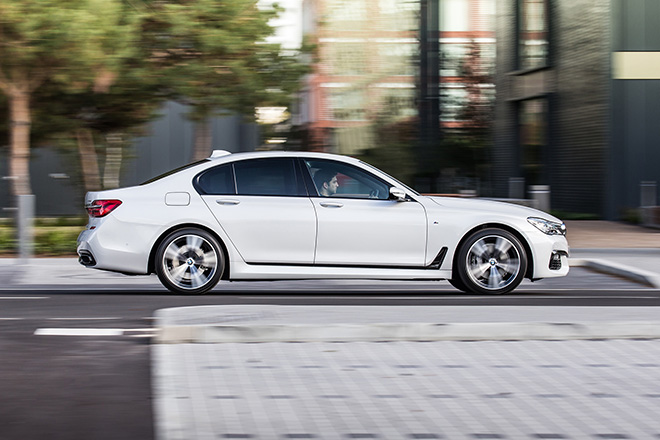 Stylish, sophisticated and with technology that will blow you away. The BMW 7 Series leaves Andrew Gibbs mightily impressed.

IT’S 4am and we’re running late. The flight leaves in just over two hours and we’re still a junction (nearly two) away from London Luton Airport. I decide to take a chance and put my foot down. Half a mile or so later, my fears are realised when I catch the camera flash in my rear view mirror. It’s a fair cop.

Being a hardened supporter of Luton Town, I am usually delighted to be driving back up the M1 with three points. Not on this occasion. My fault totally… but you can’t keep a constant eye on the speedometer and the road ahead at the same time.

It’s the first thing that struck me when I took the wheel of the new BMW 7 series. I have not driven a BMW for nearly six years (I should stress that my early-morning speed limit infringement was in my own car) and my initial thought as I made myself comfortable was a technology ‘wow’. This is not a car; it’s more like taking the controls of an aircraft.

Turn on the keyless ignition and there it is, beamed ahead of you, a hologram hovering above the front end of the car. Clear as day and right in your line of vision while not disturbing it. My current speed; the speed limit of the road I’m driving; an indication of when the speed limit changes. Perfect. It even tells you when you might be driving too close to the vehicle in front.

It’s the first indication of the technological journey on which I’m about to embark.

I’m at the wheel of the BMW 730 diesel. It screams style, sophistication. With more technological advancements that deliver both outstanding comfort and handling, greater fuel efficiency and innovative driver assistance and connectivity, sets out its stall as the ultimate vehicle for luxurious driving pleasure.

I’ll come on to the drive shortly but bear with me as I take you on a tour of the car’s interior. It’s driving comfort taken to a whole new level.

The car includes the latest version of the BMW Touch Command unit, a removable tablet with a seven-inch screen that can be used from any seat, even outside the vehicle. You’re in control of the comfort functions – seat adjustment, interior lighting and climate control – as well as the infotainment, navigation and communication systems. It can play external audio and video files.

The graphics and menu system and the rear-seat entertainment Experience displays are now aligned with the BMW Operating System 7.0, which is also used for the all-digital displays of the instrument cluster and Control Display.

The new models have a hands-free phone system as standard, including wireless charging. LED ambient lighting with a choice of six colours is available as standard.
The rear-seat entertainment system comprises two ten-inch full-HD displays with a Blu-ray player. The system allows users to access the entertainment, navigation and online functions of the vehicle from the rear seats.
You get the idea of the level of sophistication I’m talking about. So let’s move on to the drive.

My car is powered by one of a trio of 3.0-litre six-cylinder in-line diesel engines. The 730d accelerates from zero to 62mph in 6.1 seconds. Combined fuel consumption and emissions figures for the 730d are between 41.5 and 44.1mpg and 138g/km.

I have never been a fan of automatic transmission, although the argument in favour become stronger the larger the car it drives. I much prefer the control a driver has via the manual gearbox and the slight delay in response by automatic transmission to a driver’s desire to swiftly move through the gear has always irritated me.

Imagine my surprise (and delight) when I put this to the test on the 730d. An almost instant response and exactly the acceleration rate I was hoping for. The car is also a very smooth drive and takes road conditions in its stride via a sturdy suspension that absorbs those nasty bumps and hollows.

The 730d is a car that draws admiring glances. It has undergone an extensive design refresh at the front end that is now around 50mm taller at its foremost point. The traditional BMW kidney grille is now significantly larger and with long wheelbase and short overhangs, a flowing roofline and the Hofmeister kink (the upturned line at the trailing edge of the side window graphic), the new BMW 7 Series has all the hallmark BMW design cues. Exterior mirrors attached to the window are surrounded by a thin stalk to further improve aerodynamics and the front side panels have been treated to a thorough redesign, too.
The exhaust system’s tailpipes are edged in what are now wider chrome surrounds and are integrated flush into the lower section of the rear apron. The three-dimensional rear lights are around 35 millimetres slimmer and new features include a slim light strip sited below the chrome bar, which extends across the full width of the tailgate and connects the rear lights with each other.
There’s a raft of driving assistance systems aboard the 730d. As well as the afore-mentioned speedometer hologram,  the Driving Experience Control enables you to select a set-up option to suit the situation and configure that set-up individually. In ADAPTIVE mode, the overall set-up adapts automatically to the driving style and situation. It responds to movements of the accelerator pedal and steering wheel, the position of the gear selector lever and data from the navigation system to instantly select the right set-up as the car moves from city driving to the open road.
All variants of the new BMW 7 Series feature, as standard, adaptive suspension including electronically controlled dampers and two-axle air suspension with automatic self-levelling. The series also features the optional Integral Active Steering system, technology that allows the driver to execute low-speed manoeuvres with only small steering inputs and without having to change their grip on the steering wheel. At higher speeds, meanwhile, the car’s responses to movements of the wheel are less pronounced, improving both directional stability and precision on the way into corners. The system also makes the car nimbler in city driving and increases its agility and tracking through corners.

Parking Assistant Plus comes as standard in the UK and aids parallel parking and Active Park Distance Control. The pack also features Reversing Assistant –  the only one of its kind in its segment – which helps the driver to exit parking spots or manoeuvre when space is limited. It works by storing the steering movements during the vehicle’s last forward manoeuvre when travelling at speeds up to 22mph. The system is then able to reverse the vehicle for distances of up to 50 metres by steering it back along exactly the same line. All the driver has to do is operate the accelerator and brake pedals and monitor the vehicle’s surroundings.
The system also provides an all-round view of the car and its surroundings from different perspectives in the Control Display. The Remote 3D View function allows drivers to call up a three-dimensional live image of their vehicle and its immediate vicinity on their smartphone.
Cruise Control with braking function comes as standard, as does the BMW Intelligent Personal Assistant – an intelligent, digital helper that responds to the prompt “Hey BMW”. Its technology learns routines, habits and preferences to help the driver to get the best out of the in-car functionality such as the seat heating or the places they navigate to.

The Assistant is familiar with the vehicle’s functions and operates them as required. Saying “Hey BMW, I’m cold” , for example, will prompt the BMW Intelligent Personal Assistant to adjust the temperature inside the car accordingly.
It even attends to the driver’s sense of wellbeing by providing vitality and relaxation programmes and activates air conditioning, seat massage, fragrance or music.

The selected programme runs for a duration of three minutes. The new BMW 7 Series additionally offers three different Experience Modes for the interior to choose from, which are geared to suit the driver’s current mood and can be activated for as long as desired.
I could go on but you get my drift. The BMW Operating System 7.0 display and control concept takes intuitive operation to the next level.

Its all-digital displays are geared to the driver’s personal needs. The redesigned information display in the centre of the instrument cluster now leaves enough room for an excerpt from the navigation map, for instance. In the main menu on the Control Display, the driver can create and individually configure up to ten pages, each showing two to four pads (tiles) with live content. The Control Display graphics adapt depending on the operating method and the voice control system is better than ever.
Oh, and you can add new or existing services at any time by downloading from the ConnectedDrive Store and installing them in the car. Services can be booked for periods of three months, one year or three years. Also, the Remote Software Upgrade feature keeps the new BMW 7 Series up to date with the latest software. All updates can be imported over the air, either on a smartphone via BMW Connected or directly into the car using its built-in SIM card. Installation is much like a smartphone update.

They say that autonomous vehicles, driverless cars, are the future. Such is the level of technology in the BMW 7 Series that we are clearly well on the way to making that vision a reality.