YOU ARE AT: Business MK > Growth Debate > Luton: a major economic magnet 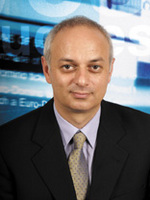 He was speaking at a national housing and regeneration conference in the town, hosted by Luton South MP Margaret Moran.

In his address, Mr Marlow (pictured) praised Luton’s achievements to date and spoke about its future potential.

He said: “There is massive potential for Luton to be a major economic magnet and driver to both the town and surrounding area and EEDA is supporting its drive for success. Luton’s regeneration programme is well under way and the loot is certainly getting put back into Luton, but we have to pull together, share resources and make our own luck”.

Communities Minister Yvette Cooper and Rt Hon Margaret Hodge MP were two of the key note speakers at the Regeneration and Housing Conference, held at the University of Bedfordshire’s Putteridge Bury Conference Centre.

Luton is a designated growth area which hosts strategic transport links and boasts some of the country’s most innovative centres of excellence for research and development, such as the Luton Dunstable Innovation Centre and the new Butterfield Technology Park that EEDA has supported.

Mr Marlow said that the remarkable diversity of the population within the town created huge potential for inward investment and gave momentum to events such as the Luton Carnival – which had done much to transform the city and grow the creative industries.

Mr Marlow added: “With major investment into London Luton Airport and expansion plans being set to provide 21,000 direct jobs, Luton will become one of the key gateways to the UK during the London 2012 Olympic Games and Paralympic Games.”

Along with partners, EEDA is investing in a number of major redevelopment projects at strategic sites across Luton, supporting initiatives which build the confidence and skills of individuals.

Key investments such as Luton’s Hat factory and the National Centre for Carnival Arts are significant in attracting the graduate population to the area and raising skills levels.

Mr Marlow told his audience: “EEDA sees the regeneration of Luton as a strategic step in raising the productivity of the town in a region that is one of only three to be a net contributor to the Exchequer to ensure the UK maintains its competitive edge in the global marketplace.

“By pulling together and grabbing the economic opportunities of the day we can lay the foundations for future prosperity.”