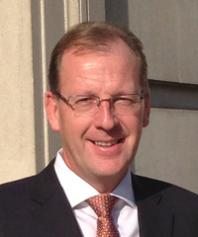 He is due to arrive at the end of the year, when current executive chairman Clive Condie will revert to his previous role as chairman.

He arrives as the airport begins its ambitious £100 million transformation plan to increase annual passenger numbers from ten million to 18 million by 2026.

Mr Barton said: “The aviation sector has long known about the huge potential at London Luton, with a convenient location, strong demand from passengers and great transport links to London and beyond. The investment and development plans already in place will enable us to deliver on this potential.

“I’m incredibly excited to have the opportunity to lead the team as we create the convenient, friendly modern airport that passengers want at London Luton.”

The £100m plan will include remodelling the existing terminal building and improving transport access. This will not only increase capacity, but also simplify the passenger journey both to and through the airport. The proposals will also deliver further improvements to the train service between London St Pancras and Luton Airport Parkway station.

The announcement comes as London Luton confirmed its busiest ever month in August, outperforming all other UK airports in delivering a 11.8% increase in passenger numbers compared to the same month last year.

The growth is being delivered by new routes and carriers and a new ten-year deal with easyJet announced in March.

Executive chairman Clive Condie said: “The team at London Luton Airport has a fantastic vision to develop a modern, friendly and efficient airport. In Nick we have found the ideal individual to deliver that vision.

“Interest in London Luton from leisure and business passengers has never been higher.”