YOU ARE AT: Business MK > News > Logistics firms prepare to invest as confidence grows 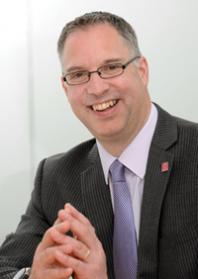 The bi-annual UK Logistics Confidence Index, published by  Barclays and business advisers Grant Thornton, includes a survey of key decision-makers from the Milton Keynes logistics industry. It showed a 15% rise in the first half of 2013 on the previous six months.
The outlook for the rest of this year remains positive, the survey added, despite continued cost pressures and increased concerns over market volatility and legislative changes. That is expected to inspire new capital expenditure, with almost two-thirds of companies in the sector looking to invest significantly.
More than a third of respondents expect business conditions to further improve, 71% anticipate revenue growth over the next 12 months and 52% predict an increase in profitability within the year.
The optimism is also leading to stronger employment prospects with 43% of firms expecting to increase staff numbers within the next six months.
Steve Robinson pictured, Grant Thornton partner and head of logistics at its Milton Keynes office, said: "This region has a large number of businesses operating in the logistics sector.  It is really positive to see confidence returning following what have been tough trading conditions in recent years.”
The sector is a barometer of the overall economy and the optimism reflects the more positive recent economic data, he added.
Operators’ modest growth plans are underpinned by a focus on business development and winning new contracts, along with better management of their operating costs.
More than a fifth of respondents said growth of their current customers’ business was their main source of new business in the first half of this year, suggesting improvements in the broader UK economy are having a tangible impact on the sector’s prospects.
However, margin pressures remain a major concern, with the majority stating this as the greatest challenge currently facing the industry.
The European Commission’s ‘Euro 6’ regulations to help reduce diesel engine emissions looks set to put a further strain on operating costs, increasing maintenance costs and fuel usage.
Mr Robinson said: “Logistics companies seem to be adopting a pragmatic and proactive approach to growth, as reflected in their capital expenditure and employee plans, and are now seeing the benefits of the leaner operating models that were adopted over the last few years in response to economic conditions."
Opportunity lies in exploring new sectors and service lines, the survey found. Almost a quarter are actively reviewing or engaged in acquisition opportunities but the focus on customer service and retention, with the aim of growing alongside clients as the economy recovers, is driving logistic companies to introduce new value-added services to strengthen market share.
Gareth Farbon, transport and logistics specialist at Barclays, said: “The industry is now well placed to help the economy continue to grow as we enter recovery mode, and with a number looking to explore new sectors and services lines, there is realisation of a need to adapt and continually improve.”