YOU ARE AT: Business MK > News > Little Peter is paying for big Paul 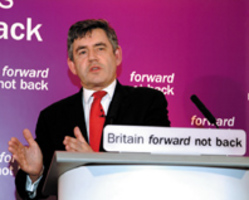 Mr Brown has finally bowed to the pleas of the business community and reduced the main rate of corporation tax from 30% to 28% on profits in excess of £1.5 million as of April 2008.

However, to offset the increase in taxation for small businesses, Mr Brown has introduced a one-year extension of the first year capital allowance of 50% for small companies and announced the subsequent introduction of 100% relief for capital expenditure up to £50,000 on general plant and machinery, starting April 2008.

Mike Hayes (pictured below), tax principal at MacIntyre Hudson, said: "The bill for this reduction in corporation tax, however, is being footed by small businesses, which don’t have the same option of relocating to friendlier climes and face a 3% increase in tax on profits below £300,000 over the next two years. Little Peter is paying for big Paul.

"Mr. Brown’s tinkering with capital allowances is supposed to combat this increase but the devil is in the detail. Some small businesses will fall into the net of paying the 22% Corporation Tax rate and not even qualify for the additional relief on capital expenditure.

"Not to mention the fact that the extra corporation tax is permanent, and any capital allowances are either temporary, not yet in place or unavailable for some companies.

"The Chancellor’s swansong does not play well on the ears of small business."

The Confederation of Business Industry welcomes the cut in the headline rate of corporation tax, saying that the Chancellor has clearly recognised the need to restore the UK’s international tax competitiveness.

CBI South East Regional director Malcolm Hyde said: "The Chancellor has acknowledged the need for the UK to compete with the tax regimes in other developed countries in order to secure jobs and investment for the future.

"In particular, the change will benefit those big profitable companies that might otherwise be thinking of shifting their activities to lower tax regimes.

"However the business sector as a whole will not be popping the champagne corks tonight. These changes will not initially reduce the overall burden of business taxes, and there will be losers as well as winners.

The view of the Federation of Small Businesses: "This is the Chancellor’s 11th Budget and this year’s offering is no different to the others – he gives with one hand and takes with the other," said FSB national chairman Carol Undy

Small firms, which represent 58% of the workforce in the private sector, were up in arms over the changes to corporation tax.

"A cut in income tax is welcome but does not fully offset the dismay felt by small firms despite the other allowances that he has offered."

The FSB welcomed the pledge to invest in education but warned that it was now time to deliver results.

Mrs Undy said: "Investing in education is vital to the success of British businesses and we welcome the initiative to get universities and business working together on innovation.

"However, we have had ten years of investment in the school system and our members are still reporting a drastic shortage of basic literacy and numeracy skills."

Malcolm Hyde of the CBI South East added: "As employers and taxpayers, businesses will expect spending increases to deliver a faster pace of improvement."

The CBI welcomed moves to raise the age at which young people can leave education or training to enter the labour market. "Raising the leaving age must therefore be part of a wider package which also includes government funding for reformed, ‘fit-for-purpose’ qualifications and high quality careers advice," said Mr Hyde.

The CBI has also welcomed the new Technology Strategy Board initiative which will work to bring business and the research community together to generate new innovative solutions to policy challenges, and the extension of the tax credit for research and development.

"Raising the rate for SMEs will significantly increase the value of their credit, reducing their R&D costs by 15%," said Mr Hyde. "For many smaller businesses the unwelcome increase in the small companies rate of corporation tax will be offset by the increase in the R&D tax credit and the changes in capital allowances. There will, however, be some significant losers."

He urged the Treasury to drop the proposed Planning Gain Supplement. "The more we learn about how the proposed Planning Gain Supplement would operate, the less workable it looks. It’s one more tax for business and risks undermining development with serious consequences for UK competitiveness, not to mention the supply of new homes with thousands earmarked for the South East."

Business supported incentives to business on climate change and the environment, Mr Hyde added. "A competition to select a demonstration ‘carbon capture and storage’ power plant for Government funding is positive news and must be moved forward with urgency. This technology has potential to play a big role in enabling power companies to reduce emissions, and progress with a commercial-scale scheme is vital."

However, the CBI is less happy with the increase in fuel duty. "The increase will not help UK hauliers competing with foreign haulage companies paying much less," Mr Hyde said.

Carol Undy of the FSB said: "Increasing road tax on larger engine vehicles and company cars will hit small businesses that use such a car or van for their business needs. Other green measures may also be counter-productive.

"Higher taxes will rein in the economy at precisely the time when businesses are seeking to invest in new ways of reducing their environmental impact."