YOU ARE AT: Business MK > News > Let firms take charge of their apprenticeship funding, says FSB 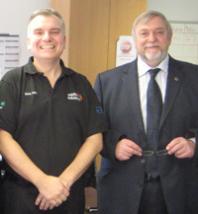 Business owners say that such a move will make the system more demand-led.
And the Federation of Small Businesses has warned that government must get any changes right first time to avoid confusion, unnecessary red tape and extra cost.
FSB Bedfordshire regional chairman Charles Smith said: “The current apprenticeships system has been subjected to constant change undermining the brand and leading to confusion. Therefore we strongly urge government to take its time with any reforms so that they get it right first time to create a system that will last for decades to come.”
Mr Smith right is pictured with FSB member David Huke on a visit to Mr Huke’s technology company Wildfire Solutions in Cranfield.  Wildfire has employed three apprentices in the past and Mr Huke is a supporter of the scheme.
He said: “This has been a great way of finding the skills that we need.  Even so, it is my belief that greater guidance and clarity is needed for small businesses.
“I agree with the principle that employers should draw down the government funding for apprenticeships rather than the providers. This should create a more demand-led system and make providers more responsive to our needs. I have often found dealing with the providers a little cumbersome.”
Mr Huke is also backing start-up company Hink Pro, which invents, develops and manufactures photographic company. Based at Cranfield Technology Park, it is the brainchild of inventors Chris Clark and Philippa Oliver.
Mr Huke said:  “I now financially support and mentor them. They are growing rapidly and see the apprentice scheme as an unparalleled opportunity for the future.”
The FSB is preparing to have its say on the government’s plans. Mr Smith said: “Getting any change to do with funding, or wider issues around apprenticeships, right is crucial.
“We look forward to taking part in this consultation and considering which system would work best for small firms. The system must not require complicated administration, a significant increase in costs for small businesses, large upfront payments before funding is recovered or penalise employers if the apprenticeship ends early.”