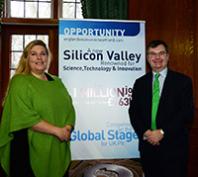 It aims to collate information, resources and comment as the vision proposed by the National Infrastructure Commission to create the UK’s equivalent of Silicon Valley, with new communities, one million new homes and the same number of new jobs, by 2050.

The dedicated website, complete with Twitter feed, LinkedIn group and email updates, went live as the All Parties Parliamentary Group for the Oxford-Milton Keynes-Cambridge corridor held its launch event in Westminster.

The corridor champion and APPG chair Iain Stewart. MP for Milton Keynes South, called for a collective effort to make the vision for the region, which also includes the East West Rail link between Oxford and Cambridge being completed by 2030 and the opening of the Oxford-Cambridge Expressway, becoming a reality.

Milton Keynes, Oxford and Cambridge feature regularly among the UK’s fastest growing cities. Government believes they could perform even better if the connecting infrastructure was in place.

Howes Percival partner Lisa Mantle said: “The proposal set out by the NIC for the East-West Corridor is a ‘once in a lifetime’ bold and exciting vision and we think everyone impacted by it should be engaged and able to follow the developments and the debates.

"This new site aims to fill a gap in that provision and we hope it can become a really useful resource for everyone concerned.”

The NIC solution requires high levels of engagement with the commercial sector, designers, planners and businesses, she added. The plans will affect landowners, employers and businesses located or operating in the area. Millions of people want to know what the plans mean for them, their homes and their jobs.

"As the process begins to collect momentum we want to ensure the systems are in place to collate and collect all commentary, thought leadership and progress reports in an easy to find place."

Speaking at the APPG launch, Mr Stewart was encouraged by the readiness to realise the potential of the project. His meetings with Sajid Javid, Secretary of State for Housing, Communities and Local Government, have confirmed the government’s view that the Oxford-Milton Keynes-Cambridge corridor has the potential to drive the UK’s economic growth.

Mr Stewart added: "While there are many challenges, and to be successful we shall have to innovate new ways for central government departments and local authorities to co-operate, I strongly believe that the enthusiasm on display today bodes well for making this vision a reality."

Howes Percival has offices along the corridor in Milton Keynes and Cambridge, as well as Northampton. Ms Mantle, the firm’s corridor lead, was at the APPG launch event.

She said: “There is clearly a huge synergy for us in terms of location and our sector specialisms, which means it makes sense for us to be a facilitator in this way.

"Our clients own and run businesses that are key to the corridor’s continued economic success and continued growth and we act for thousands of organisations whose commercial future will be closely interlinked with these plans.

"The NIC has acknowledged that this is an incredibly ambitious and ground-breaking proposal and that to make it work there needs to be a shared vision which gets translated into statutory plans.”

Howes Percival is encouraging other businesses to get involved in the initiative.

“There needs to be collaboration between government and the local areas and local stakeholders need to be working in the national interest.  This collaboration and engagement must have a notice board, a hub or space for discussion and Howes Percival are very happy to facilitate the conversation."