YOU ARE AT: Business MK > Law > Law firm staff saddle up for charity cycle marathon 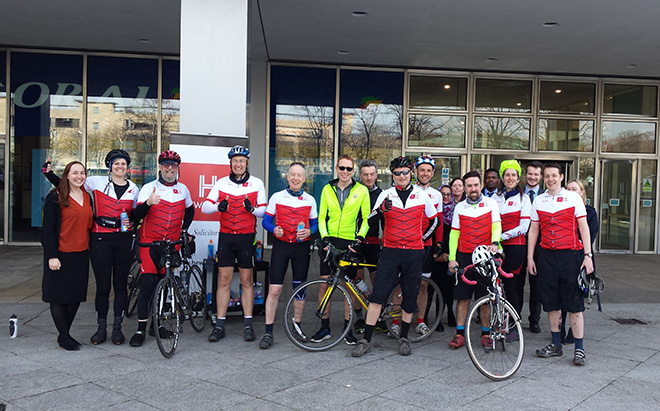 A team of ten members from across the business will cycle between
three of the firm’s four offices – Cambridge, Milton Keynes and Northampton –
on Thursday and Friday this wek (May 16-17).

Last year, the event raised more than £3,000 for Dementia UK. This
year, Hewitsons is hoping to achieve even more for Cancer Research UK.

Organiser Edward Wheen, a partner in Hewitsons’ London employment
and disputes team who is himself battling cancer, will be among those cheering
on all the participants.

“Following the success of our first two Tour de Hewitsons events,
this has now become an annual fixture in the firm’s calendar,” he said. “Those
of us who have done it before know how tough it can be but it’s always worth it
to support a good cause.

“This year, we have chosen to raise money for Cancer Research UK,
whose amazing work is getting us closer and closer to beating cancer.
Unfortunately, everybody knows someone who has been affected by this disease  so this is a cause close to all our hearts.”

This year’s Tour de Hewitsons route has been inspired by the
Cambridge-Milton Keynes-Oxford-Northampton Growth Region, which Hewitsons has
made a key focus lately.

On the first day of the event, the solicitors, partners and other
team members will cycle from Hewitsons’ Northampton office, on Billing Road, to
the Cambridge office. On the second day, they will head to Hewitsons’ Milton
Keynes office, on Midsummer Boulevard, before making their way back to the
Northampton start point.

The money they raise will help Cancer Research UK to continue
funding scientists, doctors and nurses working to beat cancer, as well as
supporting the charity’s vital public information services.

The charity has a major research centre in Cambridge and invested
£54 million into research in the East of England last year.

Cancer Research UK’s Eastern region spokesperson Danielle Glavin said:
“We wouldd like to wish the team from Hewitsons all of the best on the day and
to thank them for their support.

“One in two people in the UK will be diagnosed with cancer at some
stage in their lives but thanks to research, more people are surviving the
disease now than ever before. Without the efforts of our fundraisers, we
simply would not be able to do that vital, lifesaving work.”

To sponsor the Hewitsons cyclists and help them achieve their
£4,000 target, visit their JustGiving page athttps://www.justgiving.com/fundraising/tourdehewitsons2019