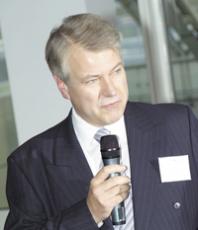 Figures from chartered accountants and business advisers Baker Tilly’s Finance Director Survey show that 41 per cent of those questioned reported late payment as a major issue. The figure has risen from 19pc in the previous six months.
The survey also reveals that more than half of companies expect no improvement in trading conditions over the next 12 months, while 28pc expect them to worsen.
Terry Saunders (pictured), managing partner at Baker Tilly’s Milton Keynes office, warned that late payment could have serious implications for the survival prospects of companies of all sizes.
He said: “The stark reality is that elastic can only be stretched so far before it snaps and we will see more companies go bust as pressure on working capital increases. Increasingly, businesses are having to fund their working capital through stretching credit terms with their suppliers as they can’t rely on invoices being paid on time. This creates a chain reaction throughout the economy.”
The research also highlighted that 60pc of firms had made redundancies in the 12 months to September compared to 42 per cent in the 12 months to March.
Lack of consumer confidence had overtaken lack of bank credit as the main factor affecting business performance, while 57pc of finance directors were concerned at a growth in the risk of criminal fraud hitting their business.
Mr Saunders said: “Reduced concern about the availability of bank credit could be interpreted as a positive sign of an easing of credit conditions. However, as evidenced by the pressure on supplier payments, I suspect it more reflects businesses simply getting used to tough conditions and moving on.
“Some entrepreneurs have given up on their bankers and are finding another way.”
However, like-for-like sales were expected to rise and the development of technologies and products, plus expansion into new markets, would drive growth.
Mr Saunders said: “Despite some positive signs of a slow recovery, times will remain tough for business over the next year and finance directors need to remain ever-vigilant and keep control over costs and management of working capital.”