YOU ARE AT: Business MK > News > LastMinute.com founder Baroness Lane-Fox takes over as OU Chancellor 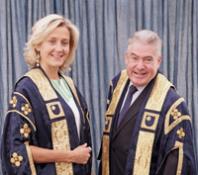 Having built her career in the digital world, making her mark as one of the founders of the internationally recognised leisure and travel website LastMinute.com, Martha Lane Fox went on to serve as the government’s UK Digital Champion, leading a drive to encourage more people and services to engage with the online world.

In 2012 she launched the charity Go On UK, aimed at plugging the digital skills gap among British adults. Last year she joined the House of Lords.

Baroness Lane-Fox (pictured with OU vice chancellor Martin Bean) said: “I have seen the power of technology to transform the way we live – from shopping and socialising, to working and studying. That is why I am so excited about becoming part of the Open University family, as it has an incredible track-record of harnessing new and emerging technologies to improve access to higher education for people all over the world.

“Education matters more than almost anything and joining an organisation which has at its heart a mission to make this available to as many people as possible is a real honour. I can’t wait to start meeting those people who make The Open University so very special – the students.”

Mr Bean said: “Mirroring the ethos of the OU, Baroness Lane-Fox is a tireless advocate of the digital age, working constantly to unleash the incredible power of technology to transform and improve the way we live, work and study.

“My colleagues and I are delighted and honoured that Martha has accepted the role of Chancellor of the OU and look forward to welcoming her to the university and drawing on her wealth of experience.”

The achievements of 170 graduates were also celebrated at the degree ceremony, which was held at Milton Keynes Theatre and attended by Baroness Lane-Fox and Martin Bean.

During the ceremony the work of Neil MacGregor, director of the British Museum, was recognised with his award of an honorary degree.

More than 500 graduates will be attending OU degree ceremonies held at Milton Keynes Theatre this week.