YOU ARE AT: Business MK > Commercial Property > Landowner prepares revamp of ‘tired’ The Hub 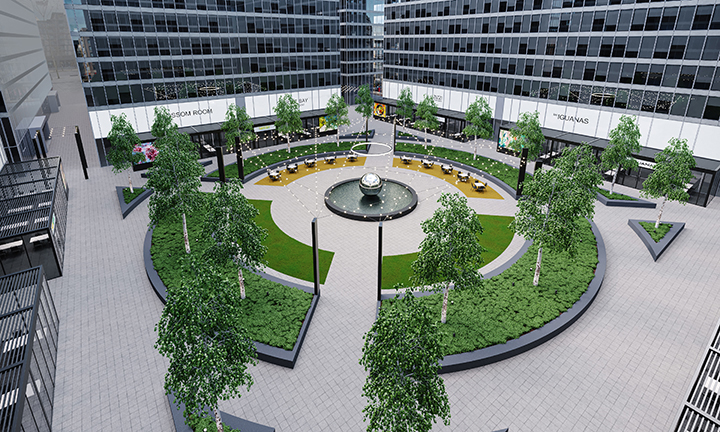 The Hub in Central Milton Keynes: Plans are unveiled for a major refurbishment.

THIS will be The Hub in 12 months’ time if plans for a major update of the “tired” square come to fruition.

Consultation on the plan is under way and if the plans are approved by Milton. Keynes Council, work is expected to begin early in 2022 with the project completed by the end of the year.

The plans include a new fountain and central space designed to create a more attractive feature that will be used all year round. There is more plants and landscaping to enhance the space, which will have improved lighting, more seating and will be designed to take account of the sun’s path.

The restaurants surrounding the central Mortimer Square will each have a covered terrace area with retractable roofs and side panels to protect customers from the weather. The canopies pictured below have been inspired by the porte cocheres on the boulevards of Central Milton Keynes.

A brochure has been produced to promote the plans for the public space that is Mortimer Square. The hub is now 15 years old, having been opened by Her Majesty the Queen in 2007, and has, according to the brochure, “seen better days”.

“It is underused, windswept, with limited green space,” it says. ‘The square was built over 15 years ago and is an important public space in Central Milton Keynes. However, it is in need of refurbishment to create a more usable and attractive public space.”

There are no plans to extend the restaurants, bars and cafes. The Hub’s landowner is to fund the improvements, with no cost to businesses and residents.

The plans are available at www.thehub-miltonkeynes.com. Comments can be made via the website or by email to mortimersquare@davidlock.com by December 23.