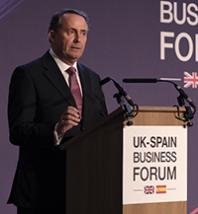 Dr Fox (pictured) was joined by King Felipe VI of Spain at Mansion House yesterday (Thursday) to celebrate the strong bilateral trade and business ties between the two countries.

The UK and Spain are close trading partners. In 2015, bilateral trade between both countries amounted to £41 billion. Dr Fox outlined key investment projects by leading Spanish companies in the UK, including London Luton Airport.

Operated by Spanish company AENA, in partnership with Ardian, a major European investor, London Luton is currently undergoing the biggest investment programme in its history.

When fully complete in 2020, the redevelopment will increase the airport’s capacity by 50%, from 12 million to 18 million passengers per year.

Yesterday marked the completion of phase one, following the opening of the new road network, a 1,700 multi-storey car park and a remodelled and expanded bus and coach terminal.

Construction is already well under way on phase two, which will see the airport terminal redesigned to double the size of its immigration, security search and retail and dining area.

Speaking at Mansion House, Dr Fox said: “I am delighted to welcome the ongoing role Spanish investment is playing at Luton Airport, expanding capacity at this key transport connection.

“Every year millions more people will be able to visit London and the rest of the UK for business ensuring the UK remains Europe’s number one destination for Spanish direct foreign investment.”

The project at London Luton is forecast to create 10,500 new jobs and contribute an additional £1 billion to the UK economy by 2030.

Airport chief executive Nick Barton said: “LLA is a fantastic example of the close partnership between the UK and Spain. LLA is the fastest growing major airport in the UK. The support and experience of AENA has been a key contributing factor to our success.

“LLA’s transformation will provide much-needed air capacity for the South East and improve the experience of the millions of passengers who travel with us each year.”

Britain remains the number one European destination for Spanish investment. The UK Spain Business Forum brought together more than 250 senior business delegates from across the UK and Spain to strengthen trade and commercial ties between the two countries.

As well as the Spanish investment in London Luton Airport, the forum highlighted other major investment projects in the UK:

In 2015, exports from the UK to Spain were worth £15 billion and UK imports worth £25 billion from Spain. Around 700 UK companies are investing in Spain while over 400 Spanish companies are registered in the UK.

Prime Minister Theresa May said: “The sheer scale of Spanish investment in Britain demonstrates Spain’s continued confidence in the strength of the UK economy, and shows that we can and will maintain the closest possible relationship.”