YOU ARE AT: Business MK > News > Infrastructure must come first in growth corridor vision, say councillors 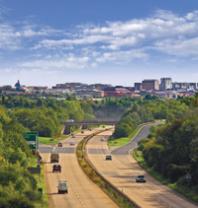 The National Infrastructure Commission’s report Partnering for Prosperity, published in November, highlighted the national potential of the Oxford-Milton Keynes-Cambridge corridor to be home to the UK’s world class research, innovation and technology expertise.

However, Milton Keynes Council has stressed the importance  of all new development building on the strengths of the present city including its green infrastructure, grid road system, commitment to regeneration, flood control, and reduction of carbon emissions.
At the council meeting last week, councillors unanimously backed a motion brought by veteran Liberal Democrat councillor Sam Crooks. They noted “with pride” the report’s reference to Milton Keynes as a development location of national significance and the choice of The Parks Trust as an exemplar of how good stewardship can be designed into new settlements.
Calling for the outline plans for the corridor to be completed by summer next year, they also endorsed the call for adequate infrastructure to unlock the development of new settlements. These include:

Cllr Crooks said: “I want us to recapture the vision of that first development corporation whose minibus toured North Bucks in the summer of 1967 and foresaw a city of a quarter of a million people where there then only fields.

“We are called to do that all over again – that is the magnitude of our challenge.

“But there must be safeguards. Our success as a city has been due to some very clear features that all of our citizens support.  These must continue.

“And there must be money up front for infrastructure – the then Development Corporation’s direct link to the Treasury was a crucial factor in building our city between 1970 and 1990.”

He added: "We are setting out on a journey to bring our already great city to an even greater future as one of Britain’s top cities.”