YOU ARE AT: Business MK > Education > In a time of division, universities must bring people together

In a time of division, universities must bring people together 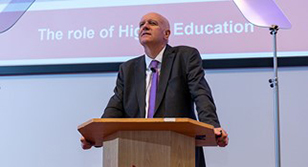 Bill Rammell, vice-chancellor of the University of Bedfordshire

UNIVERSITIES must promote freedom of speech and debate, challenge untruths and bring people together at a time of unprecedented division, Bill Rammell, Vice Chancellor of the University of Bedfordshire, said in his Annual Lecture.

Speaking at the University’s Luton campus, the Vice Chancellor said: “From Brexit to (Donald) Trump, populism is on the rise.

“We live in a world where fact and opinion are being deliberately blurred for personal and political purposes. Dispelling this abuse of power is fundamental to social cohesion, genuine advancement and democracy.”

In 2016, the year of the EU referendum, Oxford University Press named the term “post-truth” Word of the Year. In the years that followed some argue that, emotion, rather than evidence, appears to have swayed public debate and set political agendas.

The former Higher Education Minister set out how universities can lead the way when it comes to challenging misinformation.

He said: “As institutions charged with the dissemination and creation of knowledge, we have a fundamental role to play in challenging misinformation – whatever its source. We must promote an evidence based approach. And we must create space for our views to be contested, challenged and debated.

“As creators and disseminators of knowledge, we need to contest the idea that there is such a thing as an ‘alternative fact’. We must always aspire to truth and recognise that finding truth isn’t always easy.

“We need to defend freedom of speech, including speech that we find objectionable. However, we should never shy away from challenging views with which we disagree. We must teach our students how to disagree, but in an agreeable fashion, based on reason and evidence.”

Mr Rammell concluded by calling for universities to better communicate the important role they have to play in shaping communities, teaching, and research.

He said: “I think we need to be more proactive in promoting what we do, not just for our students, but for our wider society.

“We change lives. The lives of our students and graduates. The lives of people within our community. The lives changed and enhanced through our research. Our graduates are our future nurses, social workers and teachers. They will be the driving force in our local knowledge economies.  Our engineers and our leaders.

“Universities are engines of economic growth and drivers of social mobility. We have a fundamental role to play in addressing many of the very legitimate public concerns that people have – particularly when it comes to creating more job opportunities and helping communities to come together.”