YOU ARE AT: Business MK > News > How cool is that! Firm wins Queen’s Award

How cool is that! Firm wins Queen’s Award 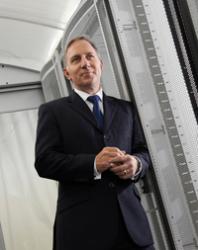 USystems, based near Sandy, has established itself overseas following the development of its ColdLogik CL20 rear coolers, which have significantly reduced the cost and carbon footprint of keeping computer rooms at an optimum temperature.
The coolers are now used in data centres around the world.
Managing director Michael Cook (pictured) said: “We are extremely excited and proud to receive our first Queen’s Award. In addition to the honour, it will elevate our profile internationally and endorse our ability to create and manufacture world-class products.”
The coolers draw the hot air and waste heat generated by active IT equipment across a heat exchanger, cool the air and return it at a pre-determined temperature to the data room.
The new systems can be fitted in established centres and have been installed in more than 100 centres worldwide.
Mr Cook said: “This is many times more cost-effective than using air conditioning and has far reaching effects on improving the financial drain and power consumption of many businesses throughout the world.
“All these data centres are making massive on-going energy and cost savings with a lower carbon footprint.”
USystems launched its ColdLogik range in 2007 as the world’s first intelligent and fully integrated solution to the problem of significantly reducing the power required to cool the IT equipment in a data centre.
The firm, founded in 2003, employs more than 50 people at its headquarters in Gamlingay.
Mr Cook said “It is also a very satisfactory reward for everyone who works here. Without their effort and commitment to the company, we would not have been in a position to win the UK’s most prestigious business accolade.”