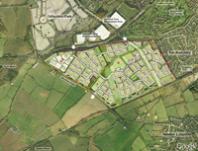 The proposed development by the South West Milton Keynes Consortium aims to meet the growing housing needs in both Milton Keynes and Aylesbury Vale.
The consortium, made up of made up of a group of companies Hallam Land, Taylor Wimpey, Connolly Homes, William Davis Homes and Bellcross Homes, says a proportion of the homes will be affordable housing.
The development would also include an employment area, health provision, land for education facilities including a primary school and early years’ provision as well as accessible areas of open space, including parkland, sports and recreational facilities, play and wildlife areas and allotments.
Up to 474 jobs would be created during the construction, as well as opportunities for apprenticeships.
The consortium says that, once built, the development could generate around 700 new jobs in education, retail and domestic services.
The first exhibition is at Longueville Hall, in Newton Longville, from 11am to 4pm on Saturday June 8, followed by a second exhibition at Chepstow Community Centre, in Bletchley, 2pm-7pm on Friday June 15.
Consortium spokesman Richard Astle said: “We are keen to explain our proposals in more detail and hear the views of the local community. The proposed development provides a logical new neighbourhood for Milton Keynes, complementing the existing communities at Tattenhoe Park, Kingsmead and Far Bletchley and supporting the town’s ambition for growth.
“The proposed site has consistently been identified, in various studies over the last 20 years, as a suitable location for housing development.”
People will be able give their feedback at the public exhibitions and:
Online via the website www.southwestmiltonkeynes.co.uk
e-mail info@southwestmiltonkeynes.co.uk
Freephone 0800 035 2874
Freepost
South West Milton Keynes Consultation
Freepost RSTY- ZCZK – XSTR
Priestgate
Peterborough
Cambridgeshire
PE1 1JL