YOU ARE AT: Business MK > Commercial Property > Have your say on plans for Saxon Court development

Have your say on plans for Saxon Court development 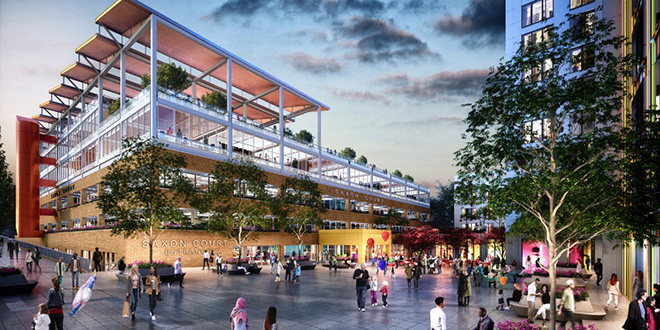 DEVELOPER First Base and investor partner Patron Capital are inviting the public to participate in a Virtual Public Exhibition to view emerging plans for the future of Saxon Court in Central Milton Keynes.

Set within a virtual Saxon Court atrium, the online gallery will incorporate ten exhibition boards detailing and illustrating the redevelopment plans of the former council building.

First Base and Patron Capital acquired Saxon Court – the former council offices in Avebury Boulevard – in October and are planning to deliver a highly sustainable development with new jobs, homes and spaces to socialise.

These mixed-use plans include flexible workspaces, local independent food, drink, leisure and retail. New 27-storey and four-storey buildings will provide space for 287 apartments for rent, including affordable homes in line with local policy.

“Our redevelopment plans are in alignment with Milton Keynes’ Strategy for 2050,” said First Base’s project director Steve Eccles. “Our objective is to retain andenhance the identity of Saxon Court while embracing everything that makes the city great into its new design and it is vital that we continue to involve the people of Milton Keynes every step of the way.”

The development will create around 2,000 jobs, with £190 million invested to fuel the long-term evolution of Milton Keynes as a city of the future.

Emerging proposals are projected to generate £7.3 million in local spend from residents and employees and £2.3m in council tax over five years. Within the next 20 years, the redevelopment of Saxon Court will also deliver more than £300 million in social value, providing long-term community benefits from local employment and training opportunities and improvements to local health, wellbeing and the environment.

While Saxon Court is set to be an iconic part of Milton Keynes’ future, First Base, in recognition of the significant role the building has played in the city’s history, has created a video in partnership with MK Living Archive, showing people’s memories of Saxon Court through the years. Watch the video here.

Throughout March, the public will also be invited to join Virtual Town Hall events. The developers are hoping that people will join them on this journey and get involved with the consultation process.

The Virtual Public Exhibition is now live. View it here.