YOU ARE AT: Business MK > Motoring > Handcrafting excellence and making history 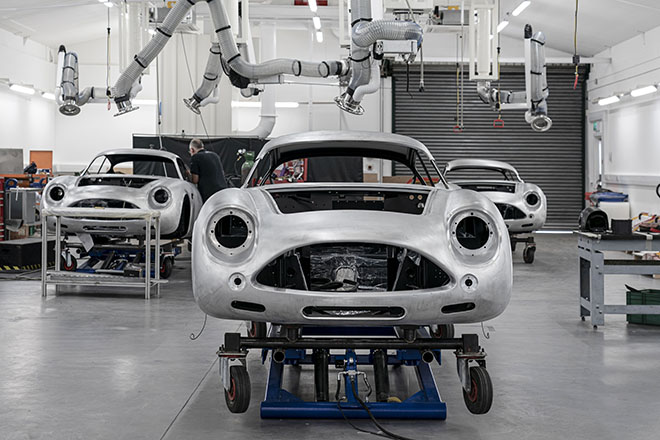 A SCENE unlike any other greets staff as they enter the new Continuation build facilities at Aston Martin Works in Newport Pagnell.

Production of the brand’s most valuable new car to date is now in full swing at Aston Martin’s Heritage Division headquarters in north Buckinghamshire. And the combination of artisan handcraftsmanship and modern production facilities and logistics means multiple Continuation cars can be, for the first time, constructed alongside each other.

But this is no ordinary car production line. Indeed, the word ‘line’ implies a procession of cars; however, at Newport Pagnell the process of hand-crafting the DB4 GT Zagato Continuation sports cars is much less clinical. Each individual Continuation sports car is the result of around 4,500 hours of detailed labour and meticulous handcrafting.

“It’s a privilege for all of us here at Newport Pagnell, as part of the Aston Martin family, to work on these remarkable ‘new old’ cars,” says Aston Martin Works president Paul Spires. “Along with the craftsmen and women who built the all-conquering DBR1 and DB3S race cars; the iconic DB4, DB5 and DB6; and the remarkable William Towns Aston Martin Lagonda super-saloon, the staff here today are making their own mark on automotive history.”

The Continuation programme at Newport Pagnell began with the DB4 GT Continuation two years ago and has spawned the iconic DB4 GT Zagato Continuation. “It is truly a once-in-a-lifetime opportunity for us to contribute to the rich history of this great British luxury sports car brand,” says Paul.

Built to race against the might of Ferrari in the 1960s, the DB4 GT Zagato was a thoroughbred machine. Evolved for the rigours of motor racing and blessed with a rare and incontestable beauty, only 19 were built.

Each of the 19 DB4 GT Zagato Continuation cars is being built at Aston Martin Works to the highest quality using a blend of Sir David Brown-era old world craftsmanship, modern engineering advancements and performance enhancements.

The Zagato continuation car follows the success of the 25 DB4 GT Continuation models that sold to collectors in 2017 and precedes what will perhaps be the most ambitious continuation to date: the Aston Martin DB5 Goldfinger Edition cars that are due to come to market next year.

“I’m thrilled to see this ambitious Continuation project bear fruit in such an exceptional way,” says Aston Martin Lagonda president and group chief executive Dr Andy Palmer. “It took courage, vision and incredible dedication for all those involved to take this idea and make it the stunning reality it is today.

“The DB4 GT Zagato is one of the true jewels of Aston Martin’s proud heritage and, paired with the new beauty that is the stunning DBS GT Zagato, the DB4 GT Zagato Continuation cars are a unique and fitting celebration of the brand’s 60-year love affair with this unmatched Italian automotive style icon.”

The DBZ Century Collection is priced at £6 million plus taxes. First deliveries to customers will commence in the autumn for the DB4 GT Zagato Continuation and 12 months later for the DBS GT Zagato.

Now a world-renowned heritage service and restoration facility as well as a new car dealership it is possible to view, purchase, service and restore cars from every era of the marque’s 106 years at Aston Martin Works.

In 2017, ten years after the Newport Pagnell factory closed, new car production returned to the site with the DB4 GT Continuation. The DB4 GT Zagato Continuation and the DB5 Goldfinger Continuation will follow from 2019.