YOU ARE AT: Business MK > News > Guide dogs and delivery robots: New project explores the interaction 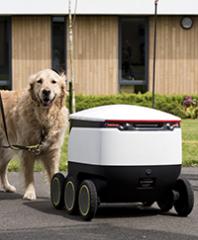 Safety is a prime concern and the robots’ developer Starship Technologies has been working with the charity Guide Dogs to study the impact that their vehicles will have on visually impaired people and their canine guides.

A pilot project, conducted in Milton Keynes, , saw guide dogs accompanied by owners and  trainers encounter Starship’s autonomous delivery robots in live scenarios. This included meeting from the front and rear, overtaking one another, and heading towards each other at a road crossing.

John Welsman, policy lead, travel and mobility at Guide Dogs, said: “Technology is constantly changing our environment and the way we live so it is vital that GuideDogs as an organisation leads the way in shaping that environment for people with a vision impairment.”

All of the dogs reacted calmly, most stopping before the robot approached, with no adverse reactions. Early indications are that training for guide dogs could be approached by treating the robots like any other obstacle encountered on the pavement. Starship’s robots have interacted with over 600,000 non-working dogs around the world and encountered similar results.

Mr Welsman said: “We want all our guide dog owners and their dogs to feel confident about navigating the streets of the future, so we’re really pleased to have the opportunity to work with Starship on this initial study.”

The project is set to be expanded in the future to include more extensive testing that will aim to discern the impact robots may have on people with a spectrum of visual impairments, including guide dog users.

With over 5,000 guide dogs on UK streets, Guide Dogs conducts research with a number of organisations to try and learn from and enhance the day-to-day experiences of visually impaired people as part of its Cities Unlocked initiative.

Starship Technologies chief executive Lex  Bayer said: "We believe that autonomous delivery can play an important role in supporting all individuals within communities by making people’s lives more convenient, including the visually impaired. Working seamlessly alongside residents is a top priority for us and we are continually looking at ways to enhance our services by engaging with organisations such as Guide Dogs to do just this.”

Starship Technologies was founded in July 2014 by two Skype co-founders, Ahti Heinla and Janus Friis, with Lex Bayer joining as CEO from Airbnb in June 2018. To date, the company’s robots have covered over 125,000 miles in 20 countries and over 100 cities around the world, encountering millions of people along the way.