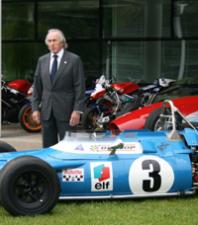 Guest of honour at the evening event was three-time F1 World Champion Sir Jackie Stewart OBE (pictured), who spoke passionately about the motorsport sector, Cranfield’s contribution to the sector’s developments and the importance of Cranfield’s MSc Motorsport Engineering and Management’s graduates to the future of motorsport.
Today’s young engineers – including those MSc students in the audience – had to be effective communicators, selling themselves and their ideas, he told the conference.
The event also heard presentations from Cranfield’s honorary doctorate Nick Fry, chief executive of the Mercedes AMG Petronas Team, Cranfield alumnus Ciaron Pilbeam, now race engineer for driver Mark Webber in the Red Bull Racing F1 team and motorcycling legend and Moto GP commentator Steve Parrish.
Clive Temple, director of Cranfield’s motorsport engineering and management programme, said: “Feedback has shown that there is an appetite for events of this nature. A key aspect of motorsport is safety.
"As Brian O’Rourke, of Williams Grand Prix Engineering, demonstrated in his presentation we have come a long way where materials and their application to motorsport are concerned.

“Cranfield has played a crucial part in this as well as in many other aspects of high-performance engineering and technologies associated with motorsport. Cranfield has a vital role to play in its future.”