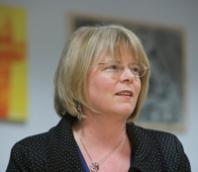 The decision by the Skills Funding Agency and the Ministry of Justice will double the college’s turnover and puts it among the UK’s top three offender learning providers.
Staff will tutor prisoners on subjects ranging from basic literacy and numeracy to vocational and academic qualifications.
The contract began last month and college staff are working in 35 institutions in the Midlands and South Central regions.
Research shows that prisoners taking part in education are far less likely to reoffend when they are released.
Milton Keynes College principal Dr Julie Mills (pictured) said: “It is a huge responsibility and a tremendous vote of confidence in the department and the college.
"I am very proud not only of the fact that we have been awarded such a significant contract but also of the enormous positive impact it will have on the individuals concerned, their families and society as a whole.”
Milton Keynes MPs Mark Lancaster and Iain Stewart said that the college’s work was key in lowering reoffending rates and rehabilitating released prisoners back into society.
Mr Stewart added: “Milton Keynes College has a fantastic reputation nationally for really making a difference in its work with offenders. They work in partnership with prisons and other agencies to tackle reoffending head on and with this national contract their impact will be extended across a larger group of prisons.”