YOU ARE AT: Business MK > News > Government adds £9m to trials of driverless vehicles in Milton Keynes 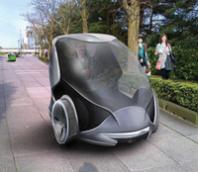 Funding for three projects was confirmed by Chancellor of the Exchequer George Osborne yesterday in his Autumn Statement.
The three-year project will deliver a fleet of around 40 self-driving pods units that will allow a real service model to be tested in Milton Keynes. Trials begin on January 1.

The aim is to establish the UK as a global hub for the development of autonomous vehicle technologies and to integrate driverless vehicles into existing urban environments.
Research teams will test public reaction to the autonomous vehicles around Milton Keynes and carry out real testing on public roads and footpaths.
The project will not only raise Milton Keynes’ profile as the best place to innovate for transport in the UK, but also the global profile of the UK’s capability to innovate as a whole.

Milton Keynes Council leader Cllr Peter Marland said: “The awarding of these funds shows that Milton Keynes is one of the world leaders in transport innovation and research.
"The scheme has the potential to change the way transport works and bring real benefits to both the city and our citizens.
"Milton Keynes has established itself as a leading centre for low carbon and intelligent autonomous mobility and is the home of the Transport Systems Catapult and the LUTZ autonomous pods project.
"The council is delighted to be part of this high quality consortium that is leading the way for the UK and will also help develop new transport solutions for Milton Keynes.

“This funding is not to just trial a new and exciting technology; its aim is to roll out a completely working service across Milton Keynes in three years which will provide residents with a more convenient, cheaper and environmentally aware mode of public transport which residents can use to make bespoke journeys.”

The project will build on the driverless pods scheme started by the Milton Keynes-based Transport Systems Catapult. The awarding of these funds is part of Milton Keynes Council’s Future City strategy that includes the MK:Smart project with BT that is being led by The Open University. The aim is to develop innovative solutions to support long-term economic growth in Milton Keynes.

The council’s director of strategy Geoff Snelson showcased Milton Keynes’ expertise as a city and centre of innovation excellence at the 2014 World Smart City Expo and Congress in Barcelona.
He said: “Winning this funding is a great result for Milton Keynes and our top class partners. Driverless transport is just one of the exciting innovations and new technologies that we will be introducing in the future to make Milton Keynes an even smarter city.”
Other partners in the programme include JLR, Tata, Ford, RDM, Thales (UK), AXA, Wragge-Lawrence-Graham, Oxford University, Cambridge University, the Open University, and the new Transport Systems Catapult.
Consulting group Arup has devised the programme and will provide programme management and technical co-ordination skills.
The project is being led by the government’s innovation agency Innovate UK and aims to establish the UK as the global hub for the R&D and integration of driverless vehicles and associated technologies into society and to attract future investment.
Proposals are business-led but had to include a local authority partner and other businesses and research organisations.  Business partners must incur at least 70% of the total eligible project costs.
Nick Jones, lead technologist at Innovate UK, said: “Cars that drive themselves would represent the most significant transformation in road travel since the introduction of the internal combustion engine and at Innovate UK, we want to help the UK to lead the world in making that happen.
“There are so many new and exciting technologies that can come together to make driverless cars a reality bit it is vital that trials are carried out safely, that the public have confidence in that technology and we learn everything we can through the trials so that legal, regulation and protection issues do not get in the way in the future.”