YOU ARE AT: Business MK > Tourism > Giant insects and birds, street food and the circus…

Giant insects and birds, street food and the circus… 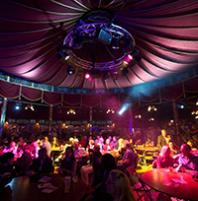 PRODUCED by The Stables every two years, IF: Milton Keynes International Festival returns for its fifth edition from Friday 20 to Sunday 29 July. centre:mk, Milton Keynes’ iconic shopping centre, is supporting the Festival as its headline sponsor.

Middleton Hall and Queens Court will be joining the public spaces of the city and venues including The Stables and Milton Keynes Theatre to host a programme of new commissions, outdoor and large-scale performance, live music, circus, stand-up comedy, family activities and free events.

The International Festival aims to transform Milton Keynes for ten amazing days, encouraging a sense of pride, and promoting the city nationally and internationally.
For 2018, the Festival’s programme is underpinned by the contemporary themes of migration, community, identity and home – what connects us and what divides us, say the organisers.
Woburn Media, publisher of Business MK, is producing the official newspaper of the IF Milton Keynes International Festival 2018.
For more details, email [email protected] or call 01908 394501.
Highlights include:

Catalan company Sarruga and their city-conquering Insectes taking over the streets for the free opening night event.

IF: Milton Keynes International Festival is known for its stunning large-scale opening events. For Insectes, giant mechanical insects parade through the city streets in a larger-than-life spectacle with music and special effects.

Operated by cycle power, these mini-beasts become super-sized fantastical steam-breathing giants towering over cars and audiences, feasting on trees and staring into upper floor windows. The Insectes weave their way through the city, ending up in Campbell Park for a firework finale.

The UK premiere of Halka by Groupe Acrobatique De Tanger from Morocco.

This collective of 14 acrobats and musicians offer us their perspective on their hometown of Tangier.

Halka – the Arabic word to describe the circle formed by a crowd gathered around street performers – takes its audiences on a journey through bustling market places, cafés and beaches, sharing stories with a combination of traditional and contemporary acrobatics, tumbling and high-flying human pyramids.

Having worked with a number of international directors, Halka is notably directed by female company member, Abdeliazide Senhadji. It will be performed in the Circus Hub within Middleton Hall in centre:mk, as part of the Festival’s celebrations of Circus250, marking 250 years of contemporary circus.

Groupe Acrobatique De Tanger is the biggest company that the Festival has ever brought to Milton Keynes.
Circus Hub in Middleton Hall, centre:mk July 27-29

Every city, town or village has its own secret recipes, the ones that do not appear on official menus. The members of Teatro Container will work with the community in West Bletchley  to go in search of those recipes and their associated stories.

The event is part of the company’s UK premiere tour.

An artist who aims to highlight socio-political reality, Verhoeven invites his audiences on board a theatrical ‘ghost train’ to explore our contemporary culture of fear, difference and migration with its ever-increasing threats and paranoia.

Visitors will be swept along on a thought-provoking tour of today’s angst-fuelling media landscape that’s so often flawlessly exploited by politicians, terrorists, marketers and fake news.

The UK premiere of The Democratic Set Milton Keynes, a film made in three days by Australia’s Back To Back Theatre.

Back To Back Theatre has been instrumental in bringing exemplary art made by people with disabilities to audiences and community participants worldwide.

The Democratic Set is a residency model for creating work which explores the belief that all people are, in principle, equal and should enjoy social, political and economic rights and opportunities.

Back To Back will work in collaboration with Milton Keynes residents and community groups to make a short film with a custom-made set to capture a series of short live performances and video portraits.

At an historicwoodland location, audiences embark on a self-guided journey following a trail of installations – performances, sound, projections and kinetic sculptures – which celebrate birds in song, movement and flight.

A hit at the Edinburgh International Festival in 2016, Wind Resistance was nominated for Best New Play, Best Production, Best Director and was winner of Best Music & Sound at the Critics’ Awards for Theatre in Scotland 2017.

The UK premiere of For The Time Being fromHolland’s Schweigman& and Slagwerk Den Haag.

Here she works with percussion group Slagwerk Den Haag to create For The Time Being, a playful experiment with the audience’s experience of time. This promenade performance is at Milton Keynes Theatre which sees the venue taking part in the International Festival for the first time.

Life of Tree consists of vast illuminated dresses, each symbolising a remarkable woman from history including Simone de Beauvoir and Florence Nightingale. Each dress has an accompanying soundtrack, spoken word and dance piece paying tribute to the women’s pioneering courage, strength and intelligence.

The Spiegeltent has been a hit since its first outing in 2010 and will again serve up the best in music, comedy, family events and cabaret throughout the 10 days of the Festival, including:

Just added to the Spiegeltent programme is a one-off concert from pioneering audio-video remixers and electronic duo Addictive TV’s Orchestra of Samples.

Orchestra of Samples brings together over 200 musicians from nearly 30 countries to form an on-screen supergroup. Joining them live on stage for this unique performance will be world-famous percussionist Dame Evelyn Glennie.

To create the Orchestra, Addictive TV filmed improvised recording sessions with musicians from around the worldover six years, including in Brazil, Egypt, Senegal, Colombia, even Bhutan.

They then sampled, spliced and re-imagined the music resulting in an extraordinary new fusion crossing multiple styles and cultures, a musical journey without borders.

For all the details and to book tickets, visit www.ifmiltonkeynes.org