YOU ARE AT: Business MK > > News > Gallery is artist’s spiritual home 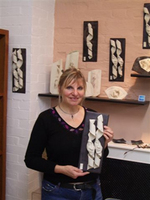 The Lucinda Brown Gallery shows an eclectic mix of works by other artists, studio glass, ceramics, jewellery, creative ironwork, textiles and turned wood. Clients include art lovers and owners of other galleries to those simply looking for a special gift.

The gallery is in a granary, which forms part of the estate of National Trust property Claydon House in Middle Claydon near Buckingham. Lucinda says: “I wrote a wish list just five years ago and making a living from my art, being with my husband Ken and living on this beautiful estate ticks all of my boxes.”

She is a colourful character who has run a variety of businesses, from making hats to running a vegetarian restaurant and designing clothes. At 42, Lucinda decided to go back to university and study for a degree in 3D design ceramics at Wolverhampton University. She went on to become artist in residence at Bilston Community College and was then asked to become a member of the Design Workers Foundation in Wolverhampton, which was a government-funded body helping graduates into business by offering training for a year in IT, Business Management and teaching.
By chance she visited Claydon House and was bowled over by its beauty.

She says: “I looked at the lake and grounds and instantly wanted to live there. Then I had goose pimples when I saw a derelict building that I had dreamed about some weeks before. I asked if we could rent it but it had already been taken. Later I got a call to say the deal had fallen through and would I like to take it.”

Lucinda and Ken moved into the granary in 2001 and began renovating it to turn it into her studio.
Her work reflects her passionate personality â€“ beautiful 3D faces with closed eyes sleep on ceramic pillows. The artist is inspired by beautiful and interesting faces and says she often stops people she meets to ask them to model for her. The gallery, which opened in March, is open between 1pm and 5pm Saturday-Wednesday. Lucinda has had a lot of support from her local Business Link in getting her enterprise running smoothly.

She initially received a start-up grant in Wolverhampton so, when she moved to Buckinghamshire, she contacted her local Business Link for free support and guidance. There were no grants available initially but her account manager, Wendy Tindsley, proved to be an invaluable source of information.

Wendy introduced Lucinda to networking group Bucks Fizz, which meets on Tuesday mornings in Tanlaw Mill, University of Buckingham, Hunter Street. Through the group, the gallery owner found website designers Randa Creative in Winslow, also a firm which helps her save money on her utility bills, and even an accountant. Then Wendy told her about a Â£200 Broadband Exploitation Grant which Lucinda was able to use towards the cost of having a website built.

Recently Lucinda has applied for a Passport to Export grant so she can find a wider market for her ceramics in Australia.

Lucinda says: “Business Link has been very helpful and friendly. They recognise that we are the big businesses of the future and they really respect and support you.”